a library of impressions

It seems like just yesterday that Micah was getting his first haircut. But today Ezra got his first (and long overdue) haircut in preparation for his first birthday on the 23rd!

My mom came up to stay with us this week and meet Ezra.

My cousin’s family was in Chicago for the weekend and stopped on by to meet Ezra. 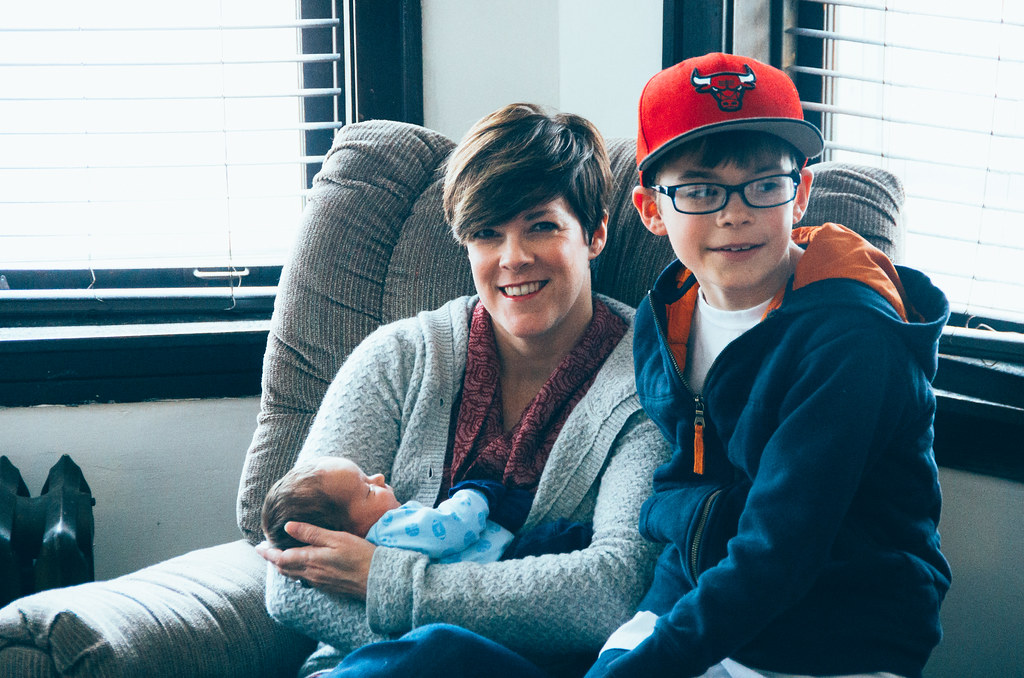 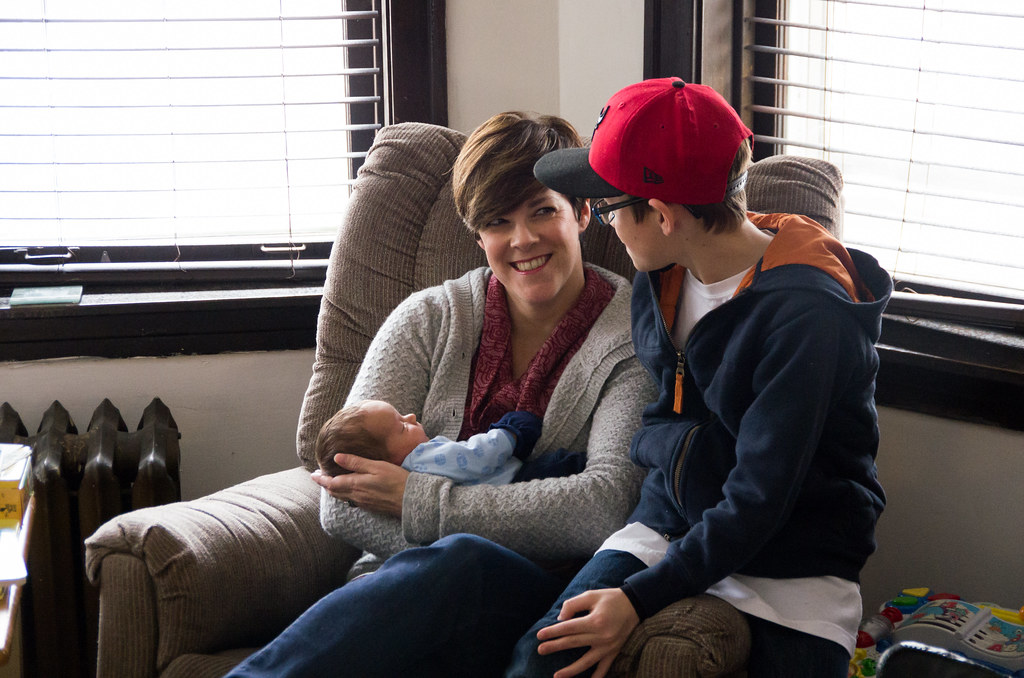 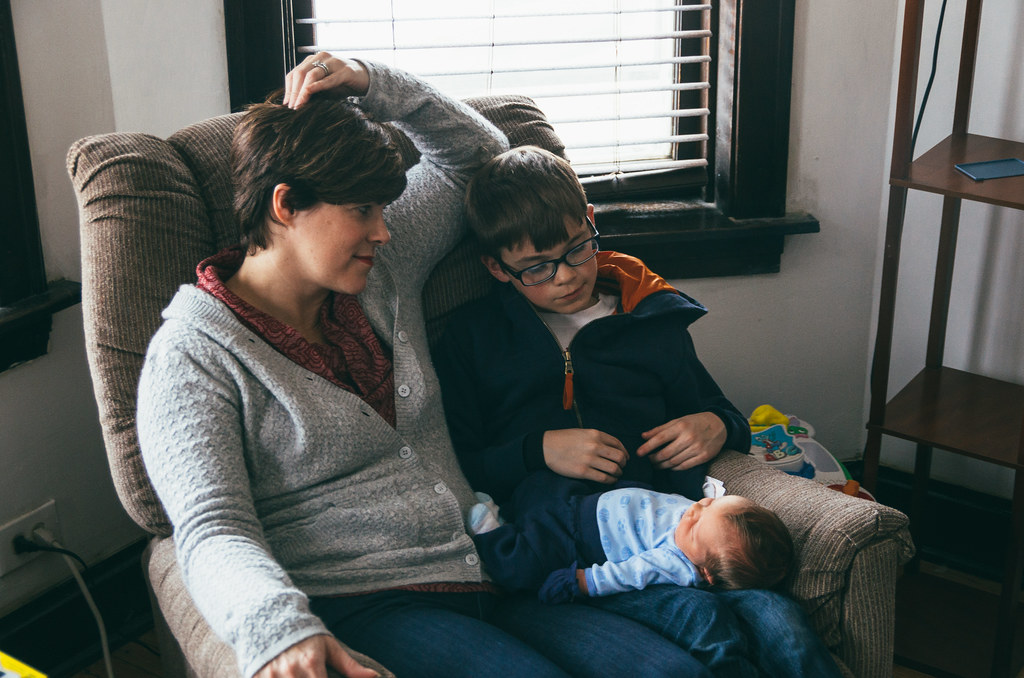 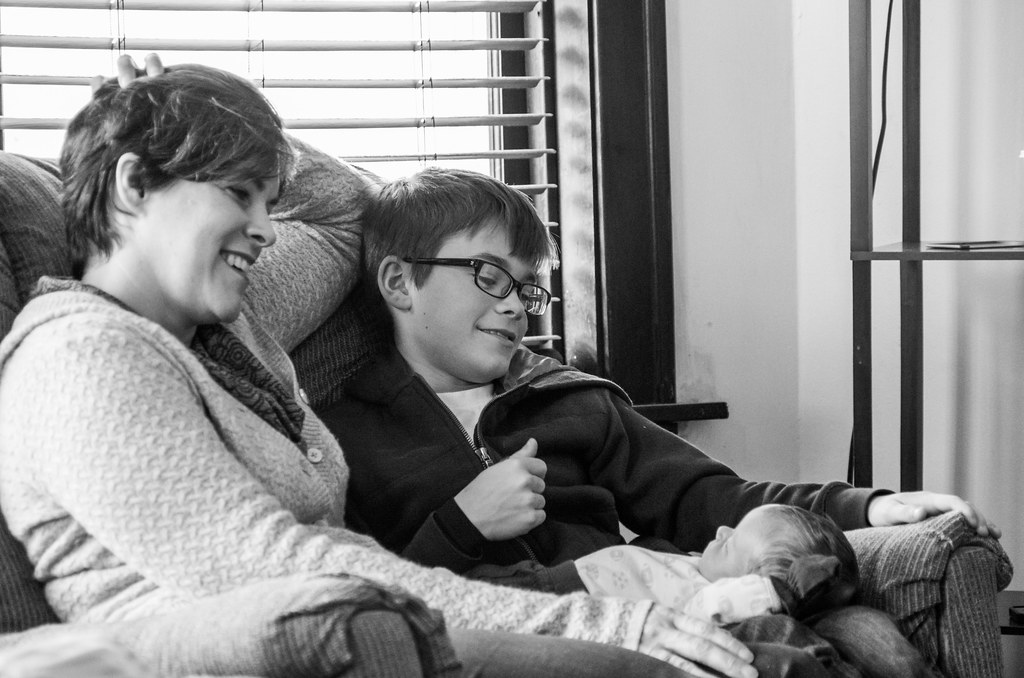 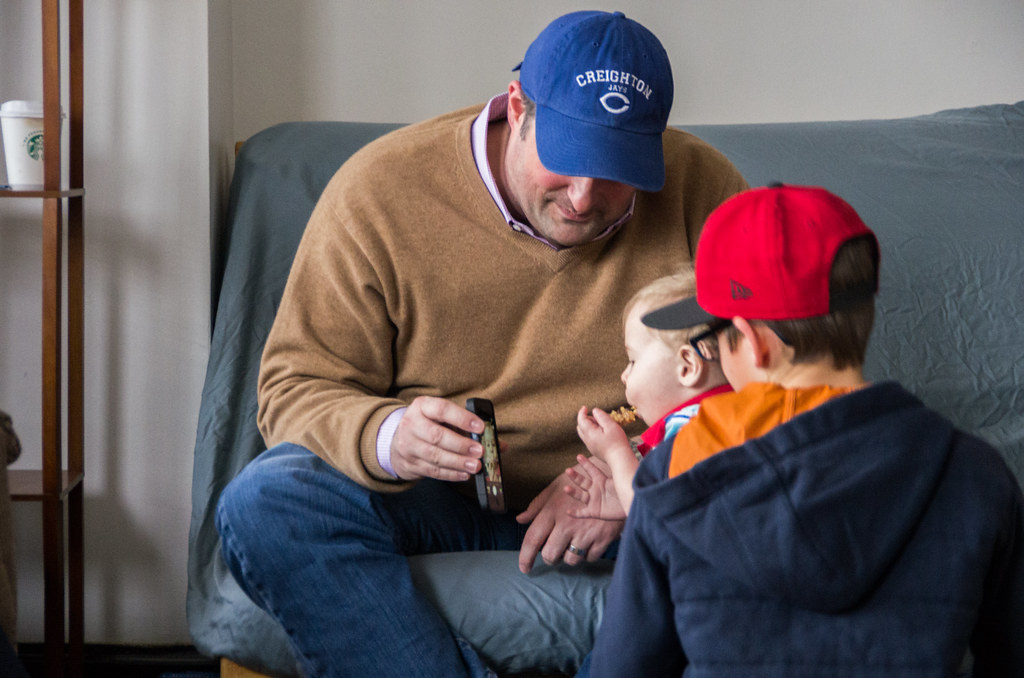 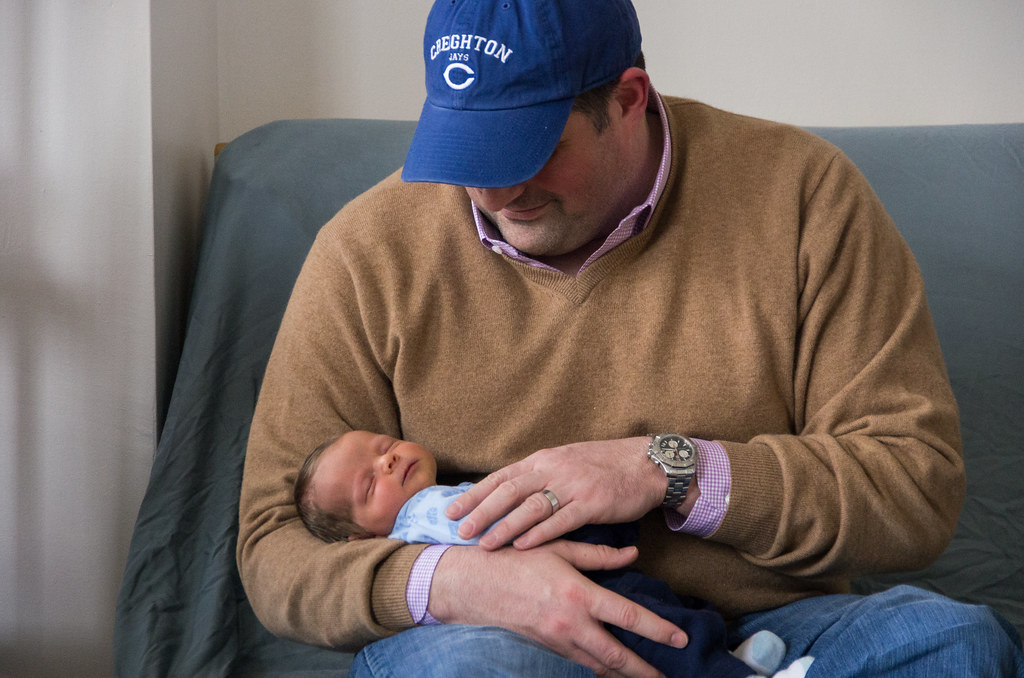 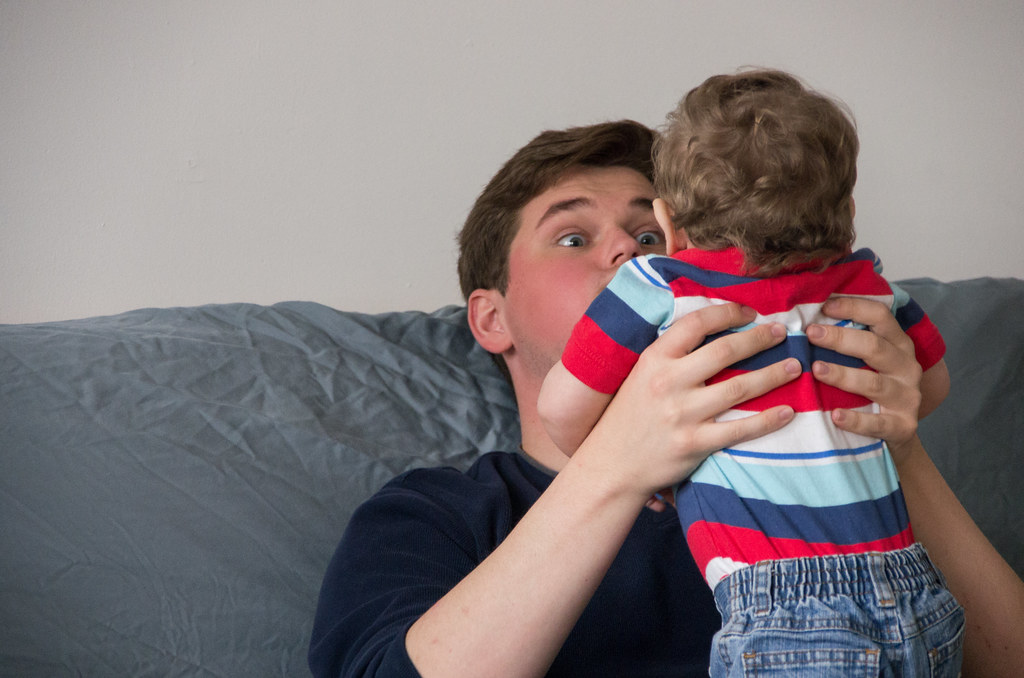 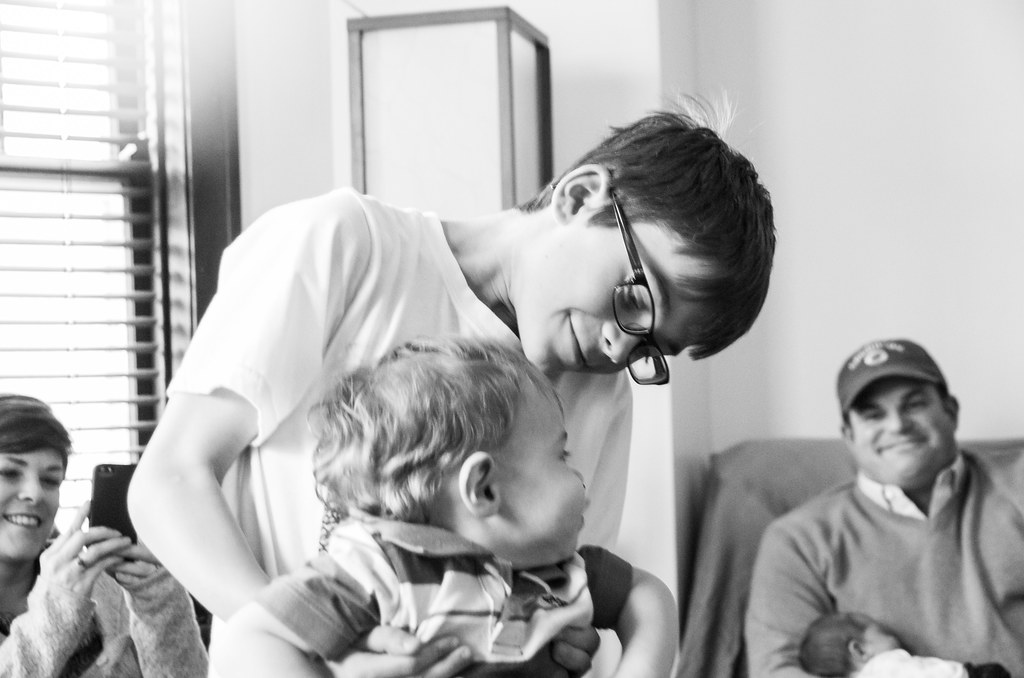 The birth of our second son all started with a little castor oil. With the suggestion of her midwife and with a burning desire to see our second son as soon as possible, Sarah mixed some castor oil into some chocolate milk and hoped for the best.

It was a desperate moment to kickstart her contractions. Facebook pleas from women who had tried this method before her cried out, “Oh no! NO! Don’t do it!”

But it worked. The contractions started out subtlety. But just a few hours later and we were rapidly running out the door, with Sarah having strong contractions only a couple minutes apart. We were in such a rush I even forgot my coat. After swerving Chicago’s pothole filled roads to the hospital we made it to our destination at about 12:30 AM. The midwife arrived soon after us and told us that we would be having this baby very soon.

After rushing to set up the tools and equipment needed for the delivery, Sarah’s water was broken. Ten minutes, a handful of contractions, three pushes, and a few moans later Ezra Yuuto Seaman entered healthily into this world. (For those who don’t know, my wife is one strong woman. And I’m a proud husband.)

The birth process is amazing. For those who haven’t experienced or witnessed it, it might sound gross or super intense. And it kind of is those things. But, it also is truly awesome – it is a miracle.

My second son was born today. I love him so much already. 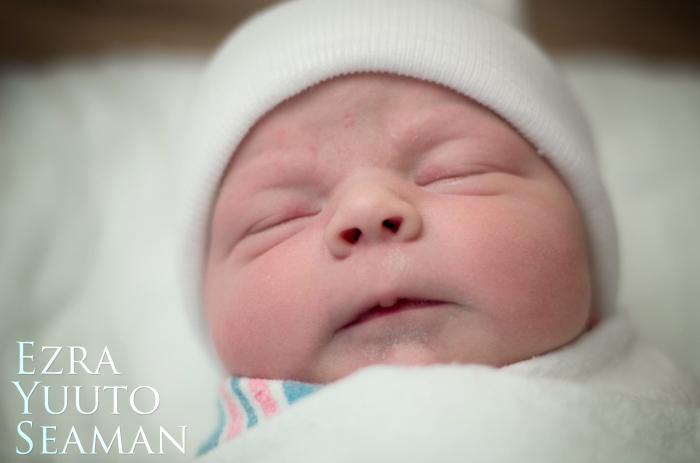 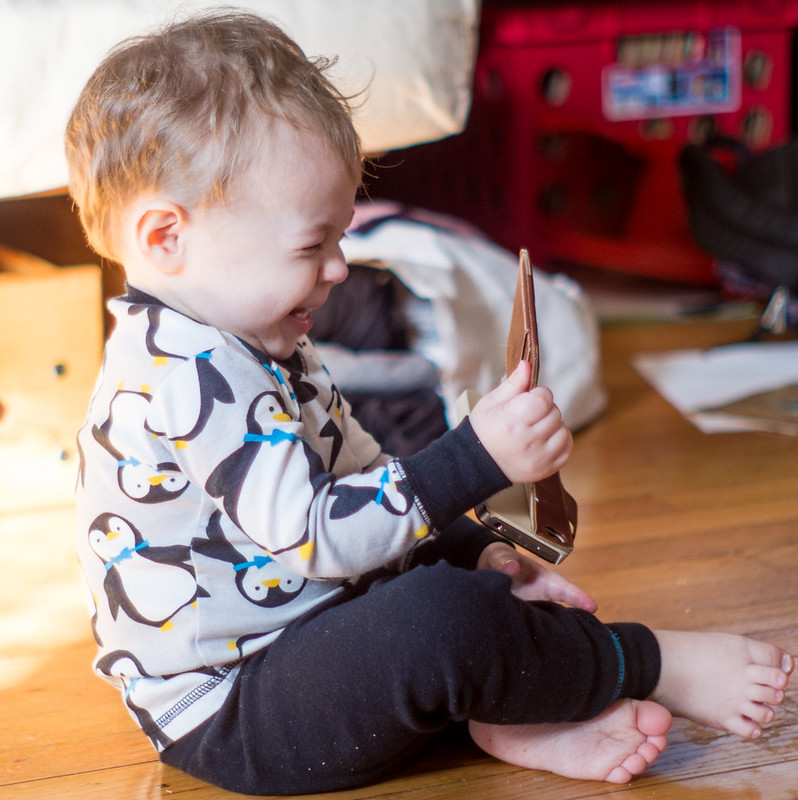 About a month after Sarah and I moved into the city of Chicago we experienced an unexpected life change. Sarah got pregnant again.

This was not planned. This was not anticipated (although I had suspected it for a couple weeks before Sarah officially found out). And now I have spent the last 7 months trying to wrap my head around the reality that we are going to have another baby. Our days of being able to sleep through the night are coming quickly to a close. We have been very blessed by the fact that our first son, Micah, almost always sleeps 12 hours straight without waking up at night. We constantly try to remind ourselves how much of a blessing this is and we try not to take it for granted.

When we found out it was almost humorous. We had given so much of Micah’s old clothes away because we were sure we were not going to have another baby for quite a while. When we moved into our neighborhood we noticed that nearly every woman was pushing a double stroller, or if it happened to be a single stroller she was pushing it while being very pregnant. Because of this, I told Sarah that her pregnancy must have been due to something that is in the water where we live.

We’re having another boy, which in many respects is a great thing. For one, Micah will have a brother very close to him in age, only 18 months apart. Hopefully, they’ll become great friends. Two, we’ll be able to use a lot of Micah’s old clothes and things for the new baby. Three, we know what a boy is like already, so at least we’re working from something familiar.

But there are major differences between prepping for your first child and prepping for your second child. With Sarah’s first pregnancy everyone was so incredibly excited for us. Sarah had multiple baby showers. Everything we needed for Micah was given to us by friends, relatives, and our church family. Even the expensive items, like Micah’s bed, carseat, and stroller. We had so many baby outfits, we barely ever had to do laundry for the kid.

Child number two — not the same story. Instead of statements of congratulations, Sarah has received comments like, “You’re pregnant, again?” We’ve received gifts for this baby from only one person. (Now don’t get me wrong, I don’t EXPECT people to get us gifts for the second baby, it’s just interesting to note how everyone seems to treat it so differently that the first pregnancy).

But before I am too critical of other people, I probably should point the finger back at ourselves. My wife’s and my feelings and reactions have been so mixed with this pregnancy. Of course, a part of us is so incredibly grateful that we are healthy and have the ability to create healthy babies. It’s an amazing miracle. It really is. And knowing so many people who have stories where they either struggle to get pregnant or suffer through miscarriages, we realize the blessing it is to be able to have children like we are. So we are thankful. At the same time, this is terrifying. It’s hard enough keeping up with the one kid that we have. He’s a non-stop ball of energy. What’s that going to look like when we have the responsibility of taking care of another baby at the same time? At the same time my wife and I wonder how we can even afford a second child. My wife is a nurse, and I am a stay-at-home dad. I barely bring in any kind of income. I recently started a web design company with a friend, but that is very minimally financially beneficial at the moment. Here in the States, maternity leave is kind of a bad situation. We’ve set it up so that she will get 50% of her paycheck for a total of six weeks. That’s just not going to cut it. When we moved into the city we took an apartment that was more expensive than we had planned with the thought that we wouldn’t have any major additional expenses coming up. Then we found out about the pregnancy. So now I have to be on the lookout for a job that can bring me some kind of money flow.

So here we are now, about a month and a half away from child number two (if everything goes as planned). Time to enter into our new stage of life: Seaman family, party of four.

Micah got his first haircut the other day. Here are some snapshots of the haircut.

Micah’s friend Ryerson is moving soon to North Dakota, so his parents spent a day in the city while he hung out with us. It was so fun to see Micah and Ryerson play together. Apparently they enjoy hitting each other in the face, stealing each others toys, and playing a baby version of tag.

Here are a few pictures from the day:

It’s been a while, basically a month, since I last posted. I don’t really know why I have been labeling them in “days” when really they are just entries. But I still do plan to have a total of 30. I’ll get there eventually I suppose.

One of the reasons it has taken me a long time to post is because I recently moved into the city of Chicago. For the past four years I have lived in the northern suburbs of Chicago. People for some reason still called that living in Chicago, even though it can easily take an hour to an hour and a half to get into the city with medium traffic on the interstate. It would take an hour by Metra train. But that’s the key I think. People in the Chicagoland area assume that if you can hop on a train from where you’re at and it goes into the city proper you can say you live in Chicago. I mean, I told people that I lived in Chicago when asked. Not anyone from Chicago, though.

Distances are so strange. How we define what is far away and what is close seems to change depending on where you live. The mode of transportation really does help define what is close and what is far. When I lived in the north suburbs of Chicago, the closest store was a Dominick’s grocery store. It was 1.7 miles away from my apartment. That was really close for up there. The nearest Taco Bell was almost 3 miles away. Where I live now, however, 1.7 miles is actually pretty far away. That’s just because within a half a mile radius of where I live now there’s dozens of stores and restaurants. I walk everywhere I go now. 1.7 miles isn’t impossible to walk obviously, but it takes a while. And on hot summer days, you just don’t want to walk that far.

The other day there was a shooting 1.7 miles from where I live. In the city, that’s far away. That’s a totally different area from where I live. Different neighborhood, different demographics. If a shooting would have happened 1.7 miles away from us in the suburbs, people would be running for their lives. Protests. Neighborhood watches. Parents wondering if their kids could play outside anymore.

Anyway, Sarah and I are getting used to the city life. It’s been good. It’s so easy to get used to. Walking everywhere is wonderful. Not needing to drive nearly at all is incredible. Sarah takes the train to work everyday. Micah and I go to the plaza right outside my apartment and watch all the children run around, listen to the musicians, watch the clown. It’s great.

Here are just a few pictures. I haven’t been taking as many as I should now that we’re here. I starting to take more, though. Hopefully I’ll update more often.

Micah enjoys hanging out at the plaza watching all the kids run around and play.

Sarah and Micah enjoying the fireworks at the park near our apartment on the Fourth of July.

Sarah and Micah walking through our new neighborhood, Lincoln Square.

My new office, when I want to get some work done. A great local coffee shop.