“Are you getting any sleep?”

That is the question that seemingly every person I come in contact with asks. What do you think? We have a newborn at home who eats every two hours.

No, no. I get it. I probably look like a walking zombie. It’s fine. I am just always amazed how everyone always asks the same questions at different stages of life. It’s quite remarkable, really. When I was engaged, people always asked when the date of marriage was. Then the second question they asked is where we were going for our honeymoon. When I was married and in a different location from my wife for about a year everyone said, “Oh! That must be SO hard! How do you do it?”

In other news, Micah is here. I am a dad. And it is amazing.

(Side note: I really didn’t know whether or not I’d be interested in seeing anything of the labor. You know, like the blood and stuff. In my mind I thought everything was going to look like a civil war battlefield. Moans and screams, blood and organs. I thought it would be a bustling place of chaos with nurses rushing around awaiting the birth of Micah. In reality, however, everything was quite calm. The midwife came in with her Starbucks and was quite relaxed and nonchalant. “Let’s have this baby!” I held one of Sarah’s legs and felt like I was an intimate part of the delivery process. I wasn’t grossed out. I wasn’t overwhelmed. It just felt natural. I felt like this is the way things should be. Sarah was doing a phenomenal job, and Micah came in under 25 minutes.)

The weird thing, though, is even though I had a newborn son – a beautiful and precious baby – and I could see that he had my fingers and toes, he had Sarah’s hair, he had a cute little nose, I really didn’t know who this little guy was. I mean, I didn’t know what his personality was like. Does he have a personality? Who is he? All I know is that he is mine. He is my son. I love him to death.

One thing I realize is how blessed Sarah and I are. Sarah had a perfect pregnancy. Literally no issues at all. She had the normal morning sickness at first, had a great second trimester, and was a bit uncomfortable towards the end. She worked full-time throughout her entire pregnancy. (Sarah is amazing and a tremendously hard worker). We also had the perfect labor and delivery. Her water broke at 2:30 am (I had been asleep for like 15 minutes…) and she started keeping track of her contractions that followed right afterwards. She relaxed, took a shower, ate a bunch of food, and laid down for a while before we called the midwife and told her that Micah was coming. We stayed and relaxed at home (I couldn’t sleep, so I just played Madden 13 until it was time to go…) until about 7:15am. We got to the hospital at 7:45am and got a room soon thereafter.

Sarah progressed pretty quickly. Her midwife commented on how much Sarah was smiling and was in a good mood. But if you know Sarah, you know that she’s wanted this baby for like, well, ever. This was the greatest day of Sarah’s life. She was finally going to have a baby! I will say, I was pretty pumped as well.

Sarah is a trooper, though. She was going to take a relaxing bath at the hospital to help her through her contractions, but by the time the tub had been filled up with the appropriate temperature of water she was 8cm dilated. If she was going to get an epidural, now was the time before it would be too late. Although Sarah had been doing tremendously through her contractions (she really hadn’t made much more than a wimper) she didn’t know how bad they might get, so she played it safe and got the epidural. (The midwife said she could have done it without, judging by how well she had been doing). Sarah got the epidural, which was somewhat of a process in and of itself. The midwife came and said she was going to grab some lunch and when she came back it’d be time to have the baby.

The midwife was right. By the time she came back, Sarah was ready to have the baby. The midwife took off her jewelry, and put on some gloves and it was off to the races. But everything was so calm. Everything felt very natural. The midwife carried on a nice casual conversation in between contractions. During the contractions she was overflowing with positive compliments of Sarah and her ability to push Micah into this world. It was quite amazing. Sarah was clearly so happy. I couldn’t believe how well she was doing. Afterwards I told her how proud of her I was. It was so cool to be with her.

The midwife told me to tell Sarah what I saw. “I see LOTS of hair!” I told her. Then, within minutes Micah made his entrance into this world. He gurgled a bit. But soon came the cry that I had longed to hear for months and months. I cut the umbilical cord and then they quickly gave Micah over to Sarah to hold. And those are probably some of the most precious moments I have ever experienced in my life. To see Sarah’s face as she looked at Micah for the first time. I took pictures, and I’ll get around to posting them sometime soon, but I was tearing up for sure. (I am now…)

But everything went well. Basically, it went perfectly well. He weighed in at 7 lb 10 oz and had no issues. His heart was beating strong, his lungs sounded great. There he was. His first diaper on, his feet stamped for record, and then he was given to me.

So yes, I have friends who have had miscarriages. I have friends that have lost their newborns. Horribly sad stories. Sarah and I do not take all this for granted. We are extremely thankful for this wonderful child and that all has gone so smoothly up to this point.

And Micah is a wonderful child. He sleeps well. He’s incredibly cute. He learned to breast feed very well, and he eats a lot. He only cries when he needs to eat or has gas. He is wonderful. And we are very thankful.

On the way home from the hospital I asked Sarah to pray for Micah and to thank God for everything. There is just so much to be thankful for. It took basically the whole 35 minute trip back to our apartment to thank God for all the blessings he’s given us with Micah. We have a wonderful support network. We have wonderful family members and friends who love us and are nearly as excited as we are for Micah.

Micah is now 11 days old. Sarah and I are still learning who this little guy is. We do know that he loves to sleep on his stomach. And he seems to really only like to sleep when someone is holding him. This can be hard in the middle of the night because you’re not supposed to sleep with the baby. Sarah has always talked about not sleeping with baby in the bed. But he just wouldn’t sleep on his own. Sarah decided to get a baby bed that goes in our bed so that we could comfort him when he starts to cry while we are in bed. It has it’s own little mattress and it has little side rails to keep pillows and things from coming into his area and suffocating or smothering him.

He also only likes sleeping on his stomach. This is like the number one thing they tell you at the hospital and at doctor visits. “Make sure that he sleeps on his back as opposed to on his stomach.” That was no problem for Sarah. I’ve heard nothing but the importance of such things from Sarah for years because she did a report on sleeping positions and SIDS when she was in college.

But Micah won’t sleep on his back. Now what?

Sarah was a bit distraught about this at first. But after asking on Facebook, we realized that we are not the first parents to have this issue arise. Nearly everyone’s response has been, “Oh yeah! We had the same thing. We just let him/her sleep on her stomach.”

So college papers and other convictions have been thrown out the window, and we just cautiously allow Micah to sleep on his stomach in his co-sleeper bed in our bed. So much for education.

I had been warned about little boys who when changing their diaper like to turn on the “fountain of youth.” (That’s what my friends and I have dubbed these occurrences). It has happened to me twice so far (but it hasn’t happened to Sarah. What gives, Micah?) When it happened I totally wasn’t prepared for it.

“WHOAH, WHOAH, WHOOOOAAAH!” I yelled the first time it happened.

Sarah was shocked, “What!? What happened?!”

Now I must admit, it was pretty impressive how far that little fire hose of his shot. My guess was a good six or so feet.

Of course some of it got on me. But it wasn’t the first time he got me. The day before he had a loose fitting diaper that allowed for a steady stream to get me all over (somehow) both sides of my pants. I had been christened by my son. I felt I was officially a dad. Welcome to the club, so to speak.

Micah was born into a family in which his father happens to love NFL football. More specifically, Cowboys football. And Peyton Manning football. The Sunday before Micah was born, Peyton Manning had made his return to the NFL with the Denver Broncos. He played like the Peyton of old, picking apart the Steeler defense. It was great to watch. So much fun.

Micah was born on a Monday afternoon. That meant that he got to watch Monday Night Football with me. Not only that, Peyton Manning was playing against the Atlanta Falcons. Yay! I explained who Peyton Manning was and told him that he was the best quarterback ever to play the game. Then, in the first quarter Peyton Manning threw three picks in like a matter of five minutes. It was pretty embarrassing. I told Micah, “Micah, now that is NOT good football. I’m sorry.”

But the thing about Micah being born this season is that there is always a Thursday night game, too. So we never go more than 72 hours without NFL. It’s been pretty great. But he usually goes to bed early with mom, so he doesn’t get to see the whole thing anyway. So he missed the most ridiculous call in NFL history on Monday night. At least I’ll be able to say when they show that clip forever and ever from now until eternity that he was just one week old when that happened. 🙂

Well, being a parent is pretty cool. It’s a privilege. It carries with it a lot of responsibility. But I’m loving it thus far. Looking forward to the journey, for sure. I’m sure I’ll have plenty to write about in the future. But as for now, I’ll just enjoy the moments when he is this small. I probably should be editing some of his pictures. 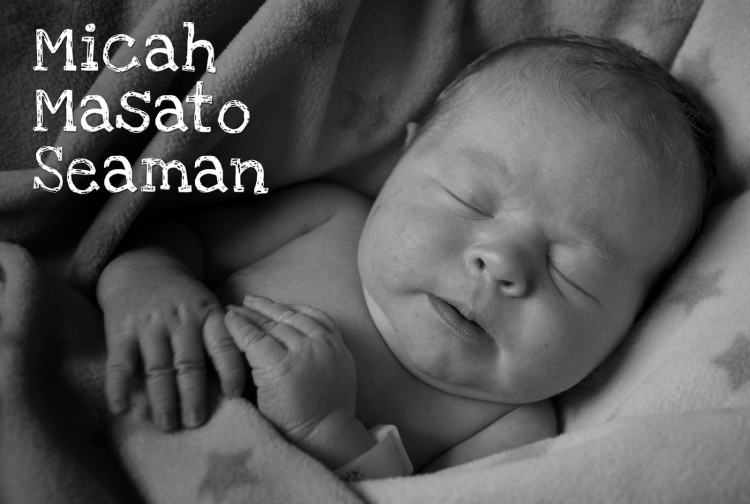