[It’s been a while since I’ve written. There’s plenty more significant things that have occurred since I’ve last written than this, such as: Micah had his last day of his first semester of preschool, our family all traveled to Indiana to see my sister got married, Sarah came down with viral meningitis this week, and Sarah and I have applied for a unique job opportunity. But for some reason I felt like I needed to vent a bit. So here it is.]

My oldest son Micah was supposed to get on the bus this morning at 8:17.

Today was the third day of summer school. It’s weird, I basically know nothing about his summer school program. This is what I know about what happens each weekday in the month of June: a bus shows up and supposedly takes him to an elementary school where he is given breakfast, learns stuff, and then comes home on a bus three hours later.

That’s all I know.

So far Micah’s transportation to school has been quite shaky. His first day of school was this past Wednesday. On Tuesday I called the school system to work out discrepancies in his bus schedule and class schedule. Even after “fixing” some issues about what bus he was to be riding, he still ended up coming home fifty minutes late from school. That means he was riding that bus for over an hour. It takes 10–15 minutes to drive there.

At 8:37 I decided to call the bus garage. They put me on hold for quite a while and eventually came back to tell me they couldn’t track down his bus driver.

“A second bus will be sent to pick him up. Sorry about the inconvience.”

I call them again.

“How long will it take for the bus to get here?”

Put on hold. Checked with the bus driver.

I call them again.

“This is the third time I’m calling. I was told that a bus would be come pick up my son. They told me that it would take another 5–10 minutes. It’s been twenty-five now. How long is this going to take?”

After checking with the bus (again), they told me “Another 5–10 minutes.”

I must have huffed or puffed audibly because the person on the other end of the line asked me if I wanted to confirm with them that the bus got there in 5–10 minutes. Like that would make me feel better.

I just said that I was frustrated because by this point the bus was supposed to be here an hour ago. He was missing a good chunk of school. And this stuff stresses me out. I don’t want to have to call the bus garage three times just to get my son picked up for preschool.

The person on the line seemed less than concerned.

Eventually the bus came. One hour and twenty minutes late. 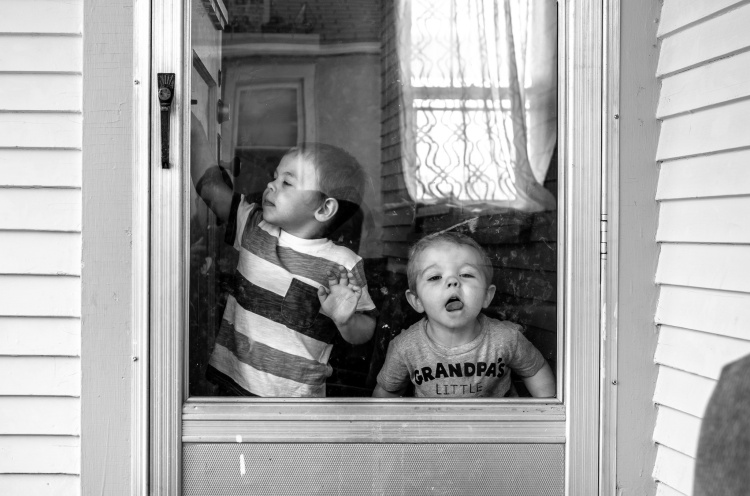 The boys entertaining themselves as they wait for the bus.