How this all started: Giving space for the story

In the book of Job, we find the story of a righteous man who, at the prompting of Satan and at the hands of God, experienced the worst kinds of loss and suffering. Yet despite losing all his children, his property, his livelihood, and his health, Job remained steadfast – falling to his knees to worship and bless God in the midst of his despair. Job not only had to endure this unimaginable amount of suffering, but also had friends who kicked him while he was down. These “friends” of Job were more concerned with being right in their theology about God than they were about their suffering and devastated friend before them.

Through most of the story, Job remained faithful to God, choosing to bless him and not curse him for the calamities he was experiencing.

But Job’s friends theologized and pontificated about God and why these things had happened. They claimed to even speak for God himself. For surely Job had done something to make God angry and vengeful towards him. These things don’t just happen to people without provocation. They rebuked and refuted Job for maintaining his blamelessness in the midst of all his suffering and loss.

There finally does come a moment in Job’s story in which we feel the tension and pressure mount to the point we believe that perhaps God will finally justify and explain himself. And God does finally respond. But he never directly answers the questions that nag at Job and his friends. Instead, a storm arises. And with great thunder God calls out from the storm to Job and says:

“Who is this that obscures my plans
with words without knowledge?
Brace yourself like a man;
I will question you,
and you shall answer me.”

God then takes Job along on a vast and incredible journey of the cosmos, describing things beyond which we are able to fully comprehend. God explains himself by recounting the majesty, the mystery, and the complexity of all his creation.

Terrance Malick’s 2011 masterpiece The Tree of Life begins with a quotation from this same encounter between God and Job in the 38th chapter of the book of Job. 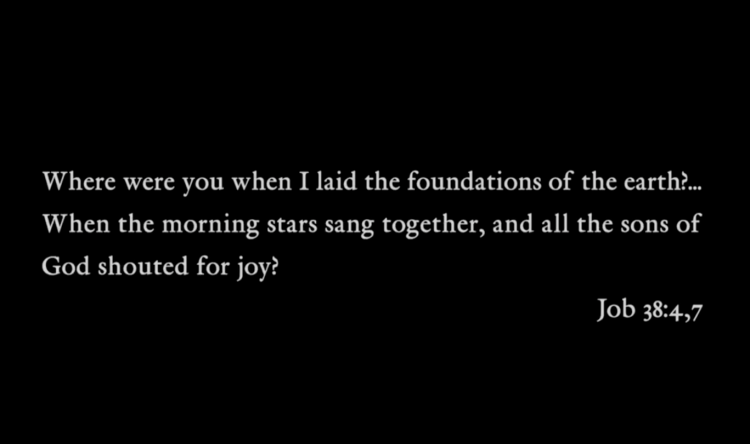 The film then continues with an incredibly wonderful montage of scenes, focused around a particular family, the O’Brien family, in 1950s Waco, Texas.

In the montage, Mrs. O’Brien (Jessica Chastain), over the beautiful voices of a choir and the magnificent imagery of every day life on this planet, explains to us the difference between the way of grace and the way of nature.

The nuns taught us there are two ways through life, the way of Nature and the way of Grace. You have to choose which one you’ll follow.

Nature only wants to please itself. Get others to please it too. Likes to lord it over them. To have its own way. It finds reasons to be unhappy when all the world is shining around it. And love is smiling through all things.

They taught us that no one who loves the way of grace ever comes to a bad end.

The next scene jolts us almost out of a trance as we see Mrs. O’Brien get a telegraph informing her that her 19 year old boy has died.

The film then moves into scenes filled with the despair of a mother and father who’ve lost their boy. It’s incredibly moving, sad, and even breathtaking. When the questions of why and how this happened bubble up to the surface, Malick transitions to an almost 20 minute sequence of awe-inspiring scenes of engrossing images reaching back to the creation of the world and ending with the birth of the O’Brien’s first son, Jack.

Here is the majority of this gorgeous portion of the film:

The stunning sequence of scenes dives into the wonder and the majesty of the cosmos. In it we see the mystery of the dance, the struggle, and the warring between way of nature and the way of grace.

And it feels familiar.

As God answered Job by taking him on a long and winding journey through the cosmos, so Malick shows us the unfathomable beauty of creation to attempt to answer the nagging questions and doubts that arise as we ponder the role that God has in this world. What better way to encapsulate those dark and deep questions than to ask them from the depths of the heart of a mother who has lost her son?

Sarah and I saw this movie in a local independent theater when it came out in 2011. Sarah instantly declared it the best film she had ever seen. I’m not sure I was ready for it then. I appreciated the visual beauty of the film for sure. The storytelling was captivating and mesmerizing, but it didn’t seem to touch my soul in the way it did for her.

We recently watched it again. As I watched the film, soaking in the visual beauty and absorbing the masterful and winding depth of the story, it was as if my heart was violently shaken. And in the shaking, the questions that I carry around with me, those doubts that I like to hide in the crevices and corners of my heart, were jarred loose and laid bare before me.

This pushed me to search for people who might help me find some answers. I wanted to find Christian storytellers who have worked through the questions I was asking myself and God. I was looking for people who have walked a journey similar to mine, and perhaps are a bit further down on this road less traveled.

The first person that came to mind was Rachel Held Evans. After quickly reading her incredible book Searching for Sunday, a book which has already been both deeply life-giving and life-changing, I decided to also read her first book, Faith Unraveled.

The final chapter of Faith Unraveled was remarkably helpful to me, and I found that it dove-tailed peculiarly well with how Malick chose to tell the story of his magnum opus of a film — the film that unexpectedly tossed me into this new journey of mine. There’s so much from the last chapter of Faith Unraveled that I’d love to delve into, but I’ll simply share how she chose to end her book:

Those who say that having childlike faith means not asking questions haven’t met too many children. Anyone who has kids or loves kids or has spent more than five minutes with kids knows that kids ask a lot of questions. Rarely are they satisfied with short answers, and rarely do they spend much time absorbing your response before moving on to the next “why?” or “how come?”

Psychologists say that the best way to handle children in this stage of development is not to answer their questions directly but instead to tell them stories. As pediatrician Alan Greene explains, “After conversing with thousands of children, I’ve decided that what they really mean is, ‘That’s interesting to me. Let’s talk about that together. Tell me more, please.’ ”Questions are a child’s way of expressing love and trust. They are a child’s way of starting dialogue. They are a child’s way of saying, “I want to have a conversation with you.”

If there’s one thing I know for sure, it’s that serious doubt — the kind that leads to despair — begins not when we start asking God questions but when, out of fear, we stop. In our darkest hours of confusion and in our most glorious moments of clarity, we remain but curious and dependent little children, tugging frantically at God’s outstretched hands and pleading with every question and every prayer and every tantrum we can muster, “We want to have a conversation with you!”

God must really love us, because he always answers with such long stories.

I believe the journey I’m on right now is a journey away from certainty and towards faith. It’s a journey in which I’m learning that it’s ok to wrestle with the realities of the dichotomy taught to us by the nuns, the way of grace and nature. It’s one where I don’t presuppose I understand God’s reasoning for everything in this world. One where I acknowledge that doubt is not a vice, but a virtue; it’s not a destroyer, but a refiner. One where I allow for doubt to be the mechanism by which my faith is enriched and emboldened. One in which I give space for God to answer my questions and to deal with my doubts by telling me his long and expansive stories.