How suggesting a change to the term Kabuki syndrome was like kicking a hornet’s nest.

Hey everyone, I’m trying to do a bit of research regarding the history of Kabuki syndrome, specifically the name itself. I am having a bit of a hard time finding resources which talk about how the name came about. All I can seem to find is that it came from the two Japanese doctors who discovered it and documented it – naming it Kabuki Makeup Syndrome in 1981.

Does anyone have any good sources for this information or any more details about it?

Also, and this may be sensitive to some of you, so I apologize in advance, but has there ever been an attempt to rename the syndrome? If so, I would love any information about such efforts.

Thanks for any help, resources, or input.

That lead to an onslaught of comments. I eventually said that I was deeply dissatisfied with the term Kabuki syndrome. And that, well, that was kicking a hornets nest apparently.

There were a few people who agreed with me, and they said so right at the beginning of the conversation, but eventually it was filled with dissension. And most people fervently disagreed with me. Some comments were appropriate and respectful. Some were, well, let’s just say not kind. Some suggested that the only reason I was bringing this up was because I was trying to distract myself from the reality that Micah has Kabuki syndrome, and trying to find something, anything, that I could take control over and change about his situation. Some suggested that if we let this affect us, because of our overly politically correct society, that we will project this onto our son and not love him properly.

At the beginning I did feel like I needed to respond to people’s comments every time something was directed towards me, and I realize now that makes me look defensive and kind of troll-ish. That’s a bummer to me, because I just do not think most of these people even understood the reasons why I dislike the name in the first place.

To leave sarcastic questions or accusations there, unanswered. Yeah. That’s hard for me. I’m definitely someone who likes to be right and have things settled. That’s hard for me. But I eventually had to. People kept saying the same things over and over, and it was eventually clear people weren’t really interested in what I had to say. They were offended by the conversation and said that I needed to stop being offended so easily.

I wasn’t happy about it either and even less so when [child’s name]’s school put on a Japanese concert and out of the whole school choose [child’s name] to dress in a traditional Japanese costume. They couldn’t see my problem but I was offended.

It was actually another parent who said to me did they pick [child’s name] deliberately because of her eyes. So other people noticed 😦

ok look at it like this. i am a makeup artist and i can’t even bring myself to say the name Kabuki brush when i need to explain to my clients what they need to use..weird isnt it?? just doesnt seem right that I am also referring to my sons condition based on facial features. When i told my teenage son he had Ka[b]uki for the first time, he wanted to know how and what that names means and comes from. How do you compare him to a made up scary looking face. Honestly, it didnt sit right so i didnt get into it but he will do his own research one day and probably be horrified that he looks like this. Yeh could be named something less judgemental on the way they look. No need. What were the Japanese thinking?

Now, there were many people who responded to this sort of comment saying that the problem isn’t with the name, it’s with you. You shouldn’t take it as a negative or a problem. If you find it offensive, that’s your fault, not the fault of the name.

Ok. There was a lot said, and I don’t want to rehash it all on here. My original intent for the conversation was twofold, 1) I wanted to find original documents like medical journals which would give me the source documents for how the name came about. So many things like this are just shared from one person to another, and I don’t know what is actually true or not. 2) I figured I wasn’t the only person who wasn’t satisfied with the term and wondered if anyone had tried doing anything about the name before me.

There were a few people dissatisfied with the name, but the answer to whether anyone had tried to do anything about the name before now was met with a resounding “No, of course not! How dare you!”

I still plan on doing research on this topic, looking at the original manuscript from the two Japanese doctors who discovered and wrote about this syndrome. We’ll see if that leads anywhere.

The other day I was watching the new Zach Galifianakis show called Baskets on FX. He is guy trying to make it in the world as a clown. He is very poor, didn’t have a job, and ended up settling as a rodeo clown. In the second episode he becomes a mentor to another rodeo clown, teaching him the ways of clowning. There is a scene where he is teaching his apprentice a clown gag. I’m supplying the clip here. Towards the end of the clip Kabuki is mentioned. You can watch it by clicking on the link below. I’d be curious of how you perceive the reference to kabuki if you feel you’d like to comment about it.

There are reasons why Kabuki syndrome is a poor choice of a name. It’s an unfortunate thing, and I’ll concede now that it basically stands no real chance of change. That became pretty clear by the Facebook conversation.

But it wouldn’t be the first genetic syndrome to have it’s name changed. Before Down’s syndrome was called Down’s syndrome, it was commonly referred to as “Mongolian Idiocy.”

In 1961, the medical journal Lancet ran a letter from noted geneticists calling for a re-naming of the condition:

It has long been recognised that the terms ‘Mongolian Idiocy’, ‘Mongolism’, ‘Mongoloid’, etc as applied to a specific type of mental deficiency have misleading connotations. The importance of this anomaly among Europeans and their descendants is not related to the segregation of genes derived from Asians; its appearance among members of Asian populations suggests such ambiguous designations as ‘Mongol Mongoloid’; increasing participation of Chinese and Japanese in investigation of the condition imposes on them the use of an embarrassing term. We urge, therefore, that the expressions which imply a racial aspect of the condition be no longer used. Some of the undersigned are inclined to replace the term Mongolism by such designations as ‘Langdon Down Anomaly’, or ‘Down’s Syndrome or Anomaly’, or ‘Congenital Acromicria’. Several of us believe that this is an appropriate time to introduce the term ‘Trisomy 21 Anomaly’, which would include cases of simple Trisomy as well as translocations. It is hoped that agreement on a specific phrase will soon crystallise once the term ‘Mongolism’ has been abandoned

The editor selected “Down’s syndrome” and the World Health Organization confirmed that description for the condition in 1965. And, that is how “mongolian idiocy” became known as “Down syndrome.” (This info was taken from Downsyndromeprenataltesting.com)

My suggestion isn’t unprecedented. There perhaps are other syndromes that have had their names changed as well that I don’t know about.

Political correctness. People for some reason think it is ridiculous to be careful with the words we use because people are “too sensitive” these days. It’s better to just say what you’re really feeling.

In regards to Kabuki syndrome people over and over told me:

“It’s just a word.” or
“It’s just a name.” or
“There are bigger things to worry about. Who cares about this?”

I realize this isn’t the most important thing going on in my life, or other people’s life for sure. I don’t see how that discredits my questions or concerns about it.

In hindsight I probably could have known this is how this discussion would have gone. People love the names that they already know. They don’t want them to change.

Chris Rock talked about this sort of thing in an interview I heard once in a podcast. In 2008, the Triborough bridge was officially renamed the Robert F. Kennedy bridge. But no one calls it that. Most every New Yorker still wanted to call it the Triborough bridge, and they still do.

I know that most people from Chicago still call Willis Tower the Sears tower. And people can get indignant about it if they hear you call it Willis Tower.

NO! It’s the SEARS tower.

But why? It’s the name of some corporation that had paid for the building. I guess it is what they have always known that building to be called, and to change it just doesn’t seem right to them. It wasn’t broke, why try to fix it? Why change it?

And believe me, I see the flip side to this argument, too. If the name of Kabuki syndrome changed tonight to Micah syndrome or whatever, people would still call it Kabuki syndrome.

If people are that passionate about what a building or bridge is named, a bridge or building that really has nothing to do with them whatsoever, then yeah, I guess it shouldn’t be surprising that parents of Kabuki syndrome kids would be upset at my suggestion of a name change.

Also, in their defense, many of them brought up how hard and confusing it would be for their kids to suddenly change what the syndrome is called. That is very valid concern to me. I get that.

At the same time, why should all the kids who have this syndrome from here on out be subjected to that name, too?

The only way the name has a chance of changing is if there were overwhelming support from parents and advocates of the syndrome. It was made very clear that that support will not be there. I can apparently go ahead and call it whatever I want, but they are proud of the term, and so are their kids. And I was told I have no right to even think I could change the name. The doctors named it what it is and so it is what it is.

Look at the battle waging over changing the Washington Redskins name. There is a ton of support for a name change, yet it still remains. I assume that it will eventually change, but who knows when that will be.

People say that changing the name is ridiculous and weak, and part of PC culture’s agenda to make us all over-sensitive about terms we know and love.

I know that people felt like I was attacking them or their kids, but I wasn’t. Not at all. And due to that, I feel I might have ostracized myself and Sarah from the “support group.”

But I’m kind of thinking at this point, with friends like these, who needs anenomes?

Like I said, I still plan to do some research regarding the name, and what it has looked like for changing the name of other diseases or syndromes or conditions. 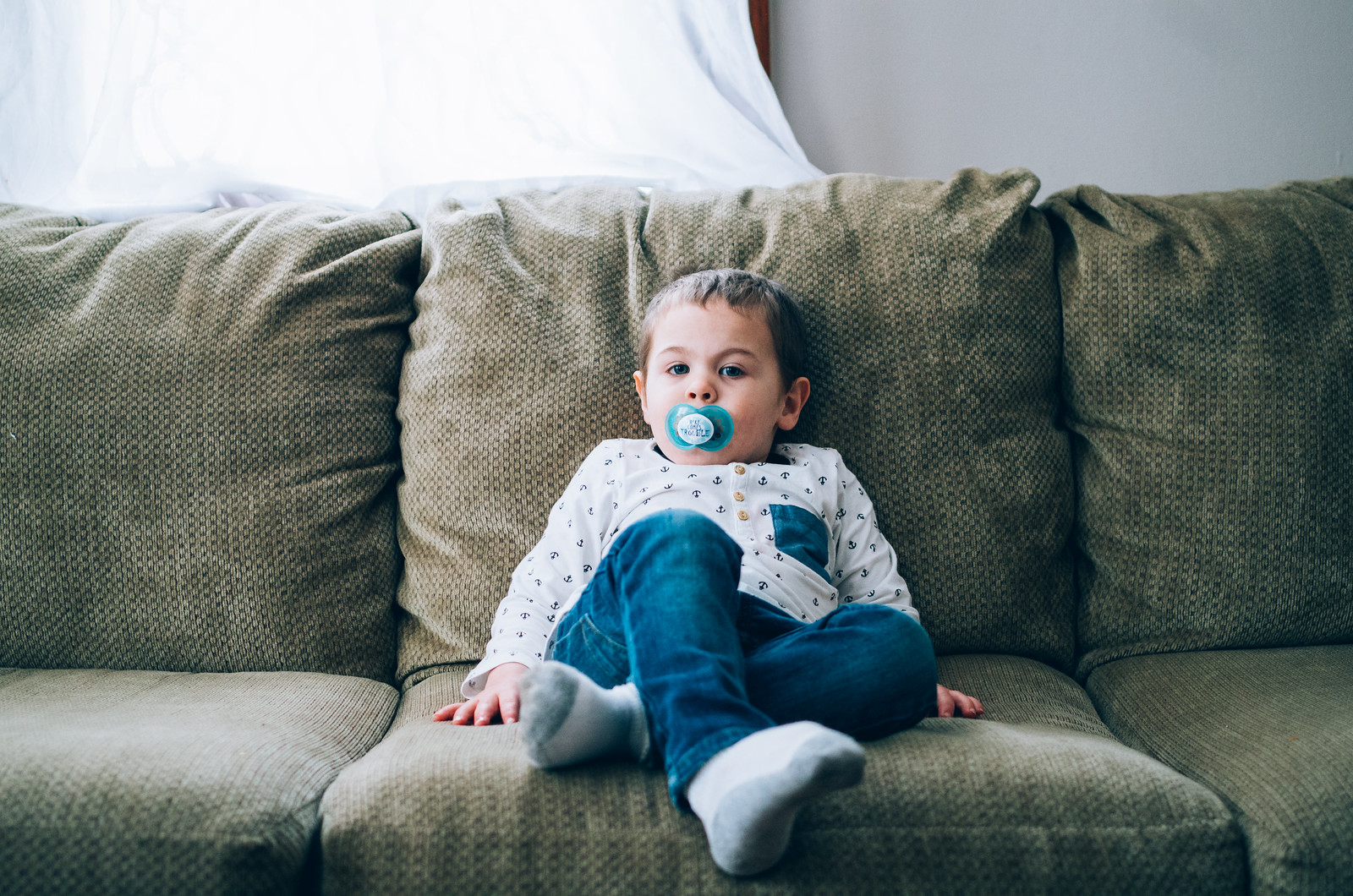