Sarah works nights as a labor and delivery nurse. Sometimes the schedule works out so she works four nights in a row. This weekend has been one of those times. She’s worked Thursday, Friday, Saturday, and tonight. All twelve hour shifts.

On top of that she worked the end of a call shift on Wednesday. So technically she’s worked five days in a row now. That’s really tough to do. And it makes things tough here at home, too.

When Sarah works, she gets home in the morning around 8:00 am or so, then she nurses Ezra and heads straight to bed. We see her for maybe 15 minutes or so. And when she gets up around 5:00 pm we eat dinner around 5:30, and she’s out the door around 6:10 or so. That means that I watch the kids almost every moment of the day. When Sarah works those multiple days in a row, it leads to exhaustion for both of us in different ways.

It can be pretty isolating. Just me, the boys, and now the puppy. When I’m having to watch them like that I basically have no time to do any kind of housework. And so after four days in a row of watching the kids without being able to get any housework done, the place kind of, well, it gets out of hand pretty quickly.

As an introvert who also likes to have things organized and ordered, well, I can be sort of an anxious wreck after those four days or so. I need some me time and I need it badly. And the house is a total wreck, desperately needing to be cleaned and organized.

So I’ve learned to take advantage of this pattern and ritualize it.

After a few days of work, Sarah is ready to just relax a bit at the house. And by the time she’s ready to stay at home with the kids, I’m pining for some alone time. So we have established the pattern where she stays and watches the kids in the basement while I escape to the kitchen to do dishes, scrub pots and pans, and clean up four days of trash, crumbs, and toys leftover by two amazingly messy kids.

These times of doing chores and cleaning have become precious to me. They are the times where I am able to be productive, but also can kind of switch off for a while and not have to worry about the kids or the puppy. I pop in some earbuds, turn on my favorite podcasts, take a deep breath and just enjoy the time to myself.

These times have become one of the many rituals I now perform on a regular basis in my home.

I call them rituals because I have become very ordered in how I do things, and I have let it be a time of quiet reflection. I listen to sermons, TED Talks, and podcasts that help expand my mind, my worldview, and my faith.

Turning chores into rituals brings greater purpose to the mundane tedious tasks of day or week and helps push me to grow as a person, husband, friend, father, and Christian.

It’s also just a chance to hear great storytelling, which is probably one of my greatest loves.

I do plan on writing more about turning household tasks and chores into rituals as it’s own blog post at a future date. I still haven’t gathered all my thoughts yet.

We got our puppy on New Years Eve. So we’ve had her now for a little over two weeks. I can’t believe how quickly I’ve warmed up to her. For as long as I can remember, a belief that I have always had about myself is that I am NOT a dog person. There’s nothing that has ever appealed to me about dogs. Cats I’ve liked. Dogs? Never. 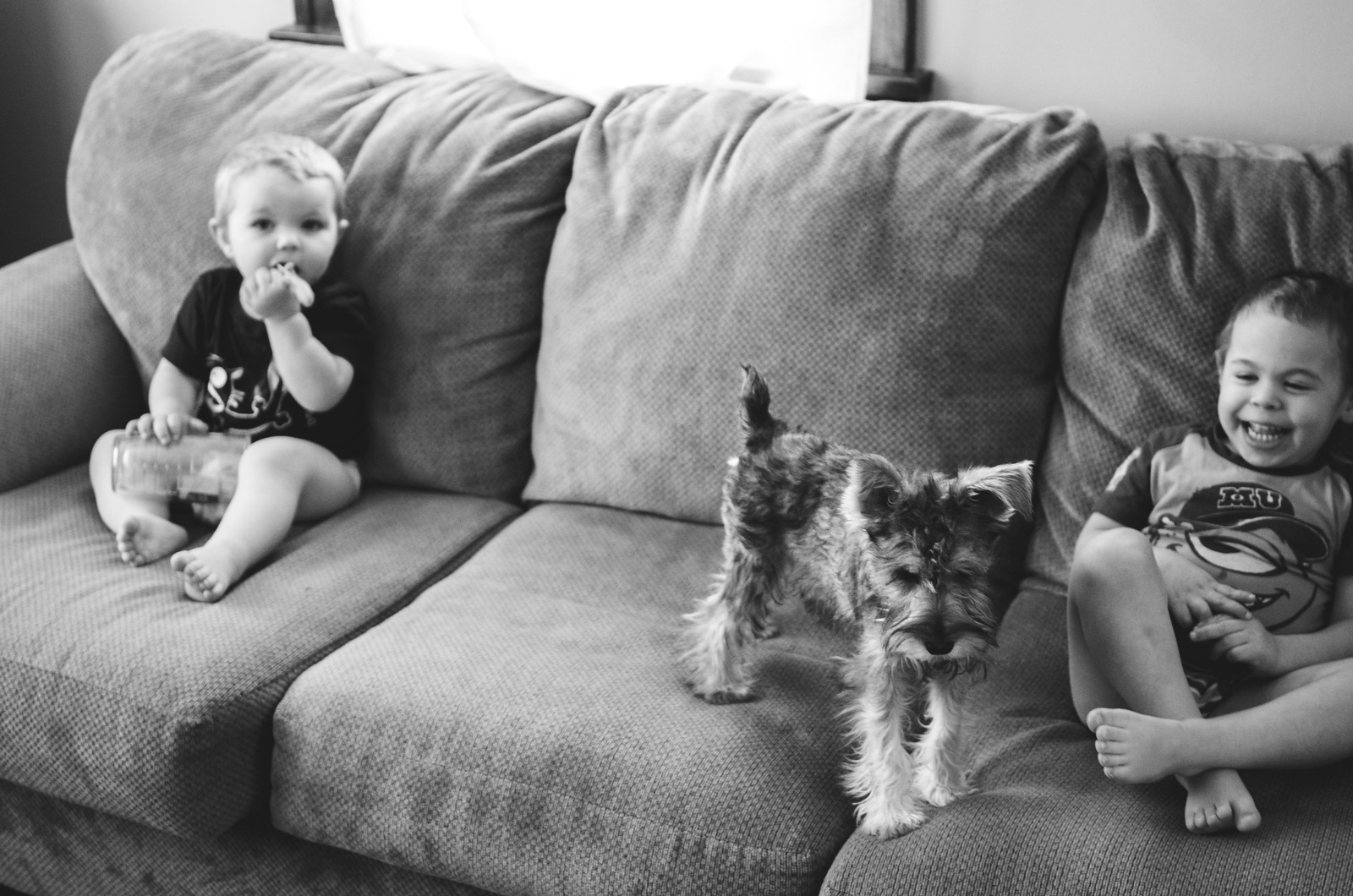 But in the matter of two weeks I have been completely smitten by our little Schnauzer. It’s the strangest thing for me to come to grips with. I love our little Missy. I feel like she’s already an essential part of our little family.

Micah and Ezra love playing with her. They giggle like crazy despite the fact they don’t really know how to play with her. It’s mostly them running away from her and laughing hysterically as she chases them down running circles around them. Micah finally has met someone that can outrun and out dart him. 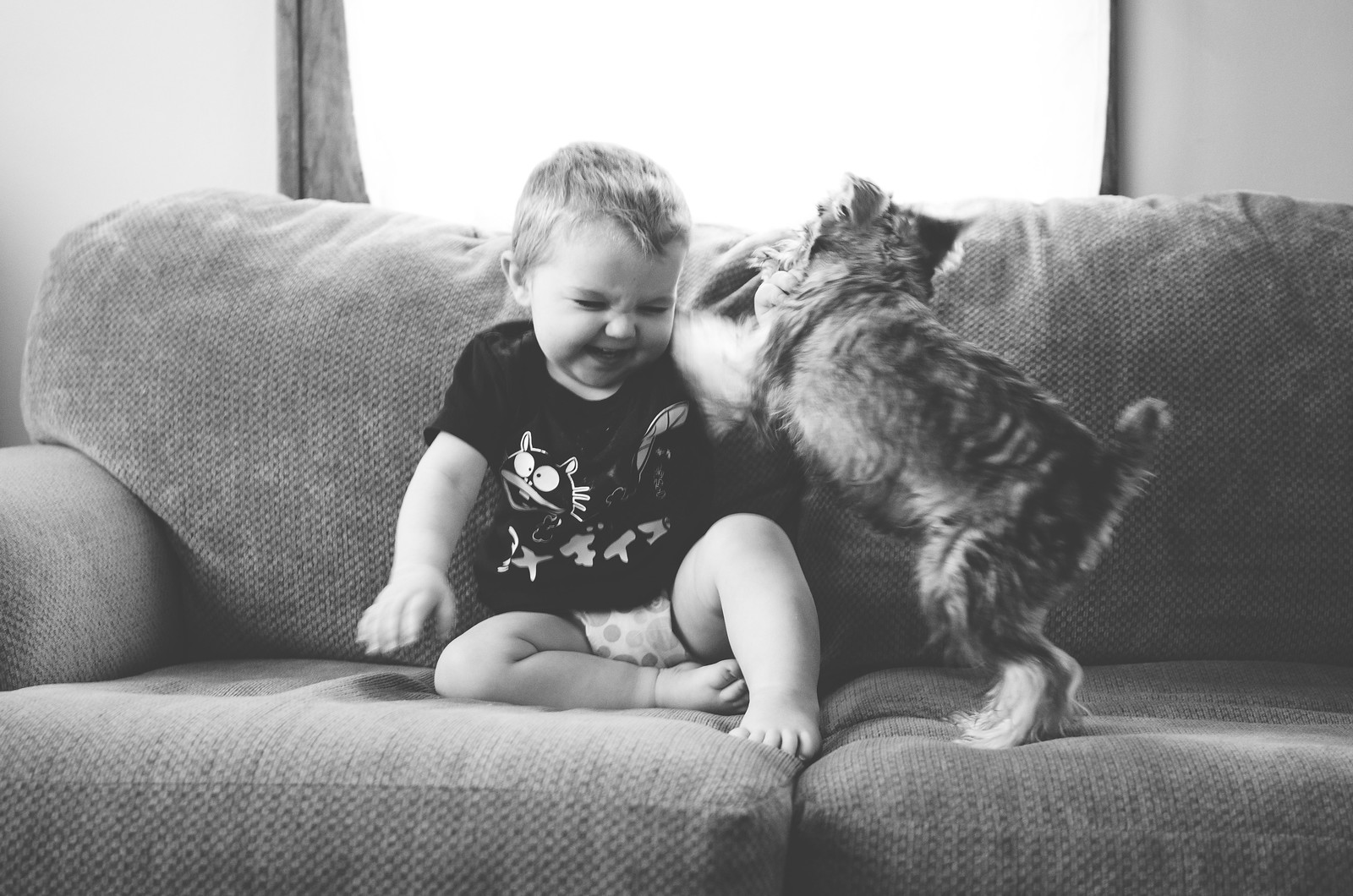 She’s still a bit nippy with Ezra and sometimes Micah too. But we’re teaching her not to do that. She’s starting to get the hang of things though. She hasn’t had an accident in the house for a few days now, and I’m hoping she’s starting to understand that indoors is not where you go potty.

The kids love to play like they are dogs. They crawl around panting like dogs, tongues out of their mouths. They did this before we got Missy, but now that she’s around they do it all the time. Micah knows that we are trying to train Missy to go potty outside. And he saw her fail to do so a couple times right after we first got her.

While I was playing with Missy one day within the past couple weeks, Micah got on all fours and starting playing like he was a dog, too. It was cute, and he was having fun mimicking the dog. But then, out of nowhere he stood up, pulled down his pants, and peed on the floor. He thought he was being like Missy. And he thought it was funny.

It was not funny.

So, great. I trained the dog to go outside, and Micah reverted to peeing on the floor. *facepalm*

Also, training a dog to go potty outside when it’s -20 degrees outside.

I had a good weekend of basically doing nothing productive. I watched the NFL playoffs today and yesterday while trying to also watch the kids. That Green Bay-Arizona game was nuts. So fun. I hope Arizona goes to the Super Bowl. They are such a fun team. And although I would love for Peyton Manning to end his career with a Super Bowl ring, I just don’t think they’re going to beat New England next week. It does still feel poetic though to have the AFC Championship game be Brady v. Manning. But I have a feeling how it’s going to go. (Not well for Manning).

Also, tonight I watched the Democratic debate. Two of my best friends and I pretty much talk about politics every day. And when it comes to these debates we usually live chat with each other during them. We’ve known each other since second grade, and over the years we’ve forged a unique sense of humor together. We can get carried away pretty quickly. And usually the jokes we end up with are so farfetched or have trailed on so long that they would never really make any sense to anyone else.

But that’s ok. I love our humor, and I would never trade it for the world.

Anyway. This is our summary of the debate:

This makes no sense to you. And that’s ok. But since I am ultimately writing this blog for myself, it doesn’t have to make sense to you.

But trust me. It’s funny.