About a year ago my family moved from Chicago, Illinois to Omaha, Nebraska. We were moving closer to family and we were about to be living in a house instead of an apartment. My sons Micah and Ezra were bouncing off the walls while we were temporarily staying at Grandma’s house. Seeing their energy and their playfulness, Sarah and I briefly thought about the idea of getting a dog for the boys once we moved into a house. But we ended up recognizing that we were already experiencing a lot of transition, and right then probably wasn’t the best time to do such a thing. Plus, there was the fact that I don’t like dogs. 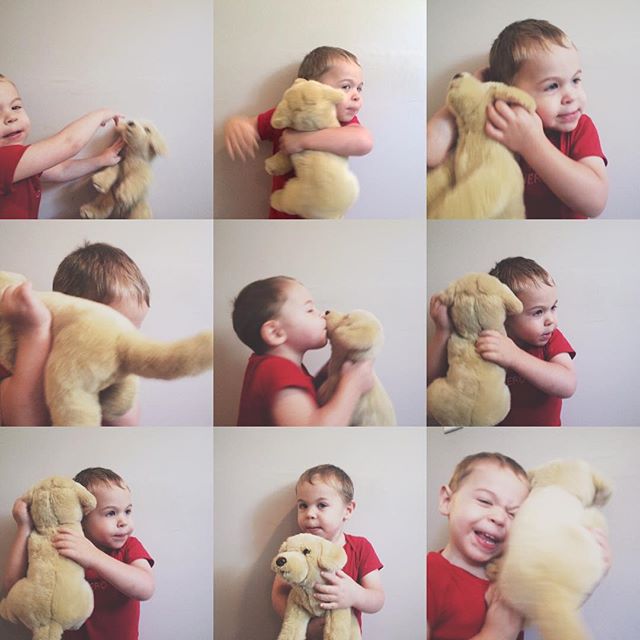 We’ve now lived in a house in Omaha for just under a year. And in that time Micah and Ezra’s love for animals has become quite apparent. They especially love dogs. In fact, they love dogs so much that I decided to take them out on separate occasions to Toys R Us to by them stuffed animal dogs. This only increased their love for dogs. This past October, they were dogs for halloween. Any time a commercial comes on TV featuring a dog, they point it out and run around panting like dogs. When we were playing outside this summer and fall, anytime a dog would pass by with their owner they had to go run and pet the dog. It was becoming more and more evident that getting a dog for these two kids would be a life-changing thing. And they deserved one. 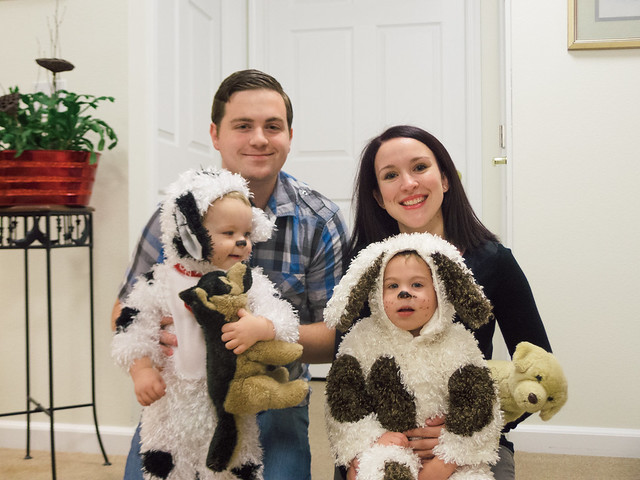 Just under a week ago my wife Sarah and I got a puppy – a 4 month old Miniature Schnauzer. 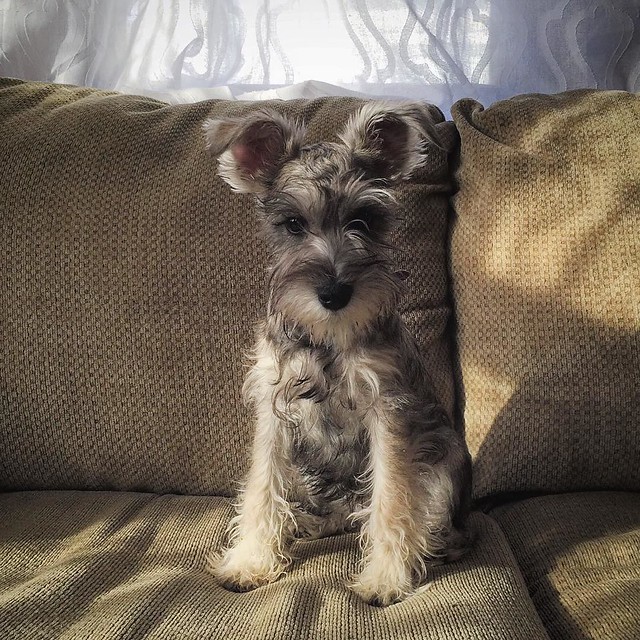 Before we got our puppy, we had been looking at all sorts of dogs in the area. We knew we wanted a smaller size dog, one that had a lot of energy but wouldn’t be destructive, and would also be willing to be a lap dog. We also wanted to make sure that the dog was big enough not to be injured by the kids’ roughhousing.

We thought maybe a Dachshund or a Corgi would be nice. But we ended up considering all sorts of dogs. We contacted shelters as far as 6 hours away from our home inquiring about specific dogs. We filled out applications, listed references, and explained why we thought we would be good dog owners.

But after failed attempt after failed attempt, and after some strange phone calls with some people in charge of some pet rescue, we decided to go ahead and head over to a kennel near our house. They had quite a number of puppies to look at, and Sarah suggested we go with the understanding of seeing how the kids react to the puppies there.

I knew that deciding to go to the kennel would be deciding to purchase a puppy. And, well, that’s exactly what happened.

We played with a King Charles Terrier / Spaniel mix, a Wire Haired Terrier, and a Miniature Schnauzer. The guy at the kennel had grown up with Schnauzers, so he was partial to the one we had been playing with and he really sold her and her breed well. Obviously. 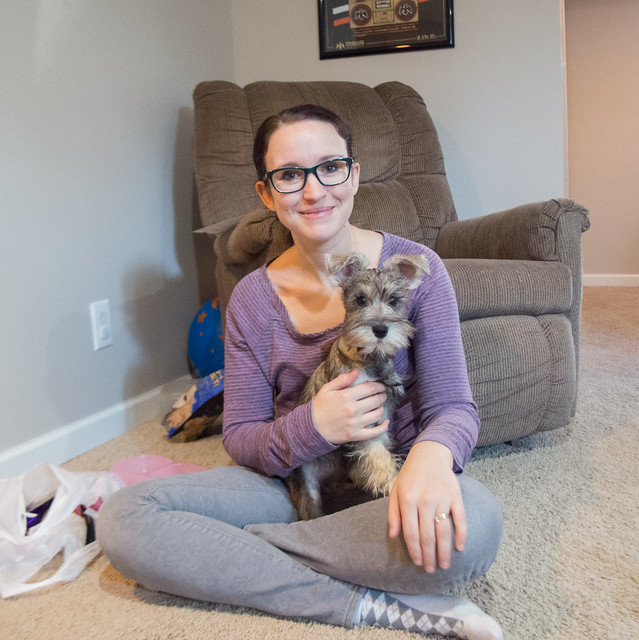 It was hard because we definitely set out to adopt a puppy. We understand the need. It was just much harder than we had anticipated. We were going to need to have our house inspected, our back yard inspected, and then have our references grilled about us and our house. All things we were willing to have done, but the dogs we had picked out that we liked got adopted quickly. Perhaps we could have been more patient and more willing to wait for a rescue dog, but we did make sure that the kennel we purchased our puppy from gets their puppies from breeders and families that treat their dogs ethically. Ultimately, it is what it is. We have a puppy and we believe we have brought her into a home that will give her the love and care she deserves. I know some people will be disappointed in us for not adopting, and all I can say is that I am sorry. But we have a dog that is a perfect fit for our family.

It’s hard to believe we have a puppy. Because my wife works night shift and I’m a stay-at-home dad, I’m the one who primarily takes care of the puppy. That was a bit of a challenge at first because I literally knew nothing about dog care one week ago. Since that time I have read every crazy dog owner blogging about proper care of a puppy and how to train one to go potty outside. It’s been quite a learning experience.

My mom recently visited and just stood in astonishment as she saw me holding and playing with our new puppy. It’s just something she never imagined that she would ever see.

She didn’t come with a name, and so we needed to name her. We had a friend at our home church in Indianapolis named Bryan that had an incredible lap dog named Missy. He used an electric wheelchair to get around and often hung out at the mall with his little dog. And more often than not, conversations were started because of Missy. She helped him make friends and talk with all sorts of people every day.

Bryan died a few years ago. And anytime I’ve gone back home I’ve really missed our chats before and after church. So when Sarah and I were thinking through possible female dog names Missy was one of the first that came up. And the name just seemed to instantly fit with our new puppy. 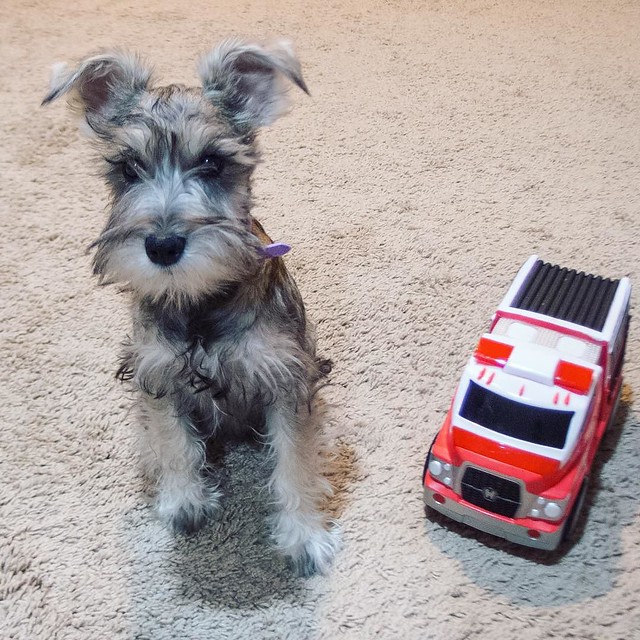 So now when I play with her and I hear myself say in a very sing-songy voice “Hey Missy! Hey girl! Good girl! You’re a good girl, Missy!” I can hardly believe my ears. Is that really coming from me? Yep. This little puppy has won me over in less than a week.

And to see her play with the boys has been such a treat. It’s so clear that humans and dogs really have a connection. It’s like they already understand each other.

For example, my youngest son Ezra, who is a little over 1.5 years old, fell down and started crying about something. Missy came running over to him, licked him on the face once, and Ezra instantly started laughing. What a cool thing.