A couple nights ago while I was on my phone checking Twitter one last time before going to sleep, and I saw a tweet saying that Bernie Sanders would be talking at a gathering in Council Bluffs, Iowa at Iowa Western Community College.

My wife amazingly had the night off, and I realized this was my chance of seeing the man in person. And so last night I drove across the Missouri River into Iowa to see him speak in person.

I had never been to the college before, so I didn’t really know where I was to park and enter the building. But when I got to the college, I knew exactly where to park. All I had to do was follow the line of Bernie Sanders stickers on the bumpers of countless Subarus.

I had heard a rumor that people like to show up to Bernie Sanders events, so I wanted to get there early. Even with them opening the doors an hour before he was to speak, there was quite a substantial line already formed when I got there. 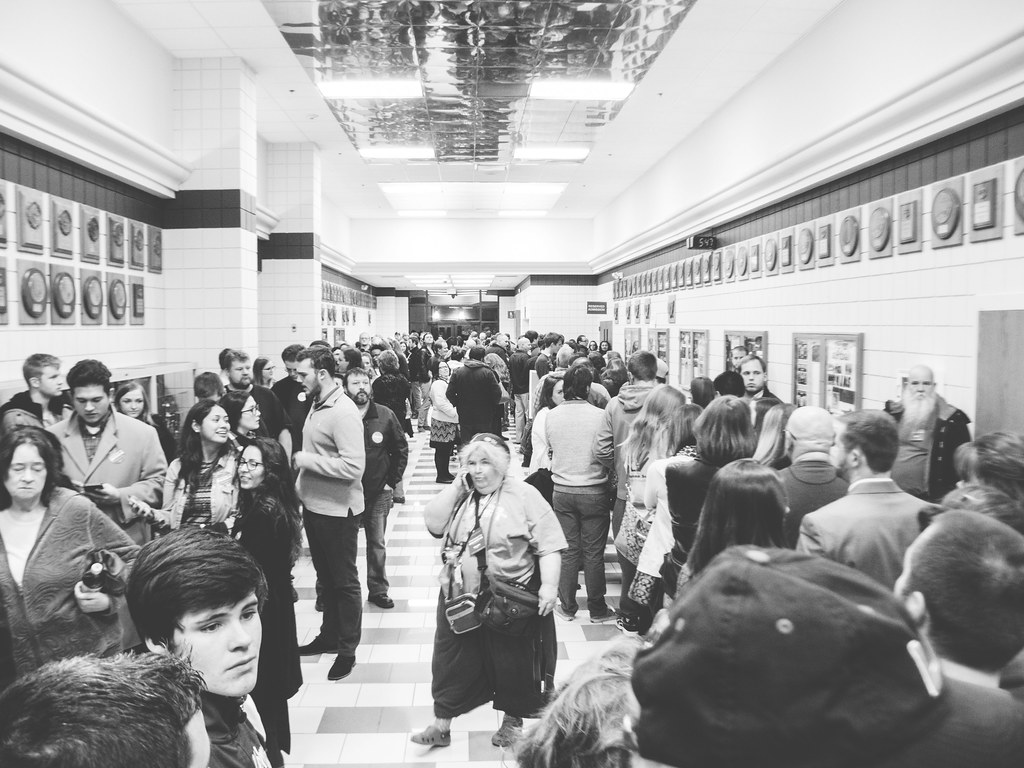 The line wasn’t organized very well, and kind of started at the back of the hallway, wrapped around, and headed back toward the back doors where they were going to let us through. It was hard to see how we all were supposed to stand in the line, so by the time I got there people just sort of filed into the line where they could. This was very displeasing to some high schoolers behind me who claimed that people “don’t understand how lines work.” Granted many of them had been there much earlier, eagerly awaiting their opportunity to get a good seat to see Bernie. So some frustration of people cutting in line was understandable, but one girl thought it was so unfair that eventually she just skipped everyone in line and walked in confidently to the gymnasium and later texted her friends that she got the entire second row for them to sit in. 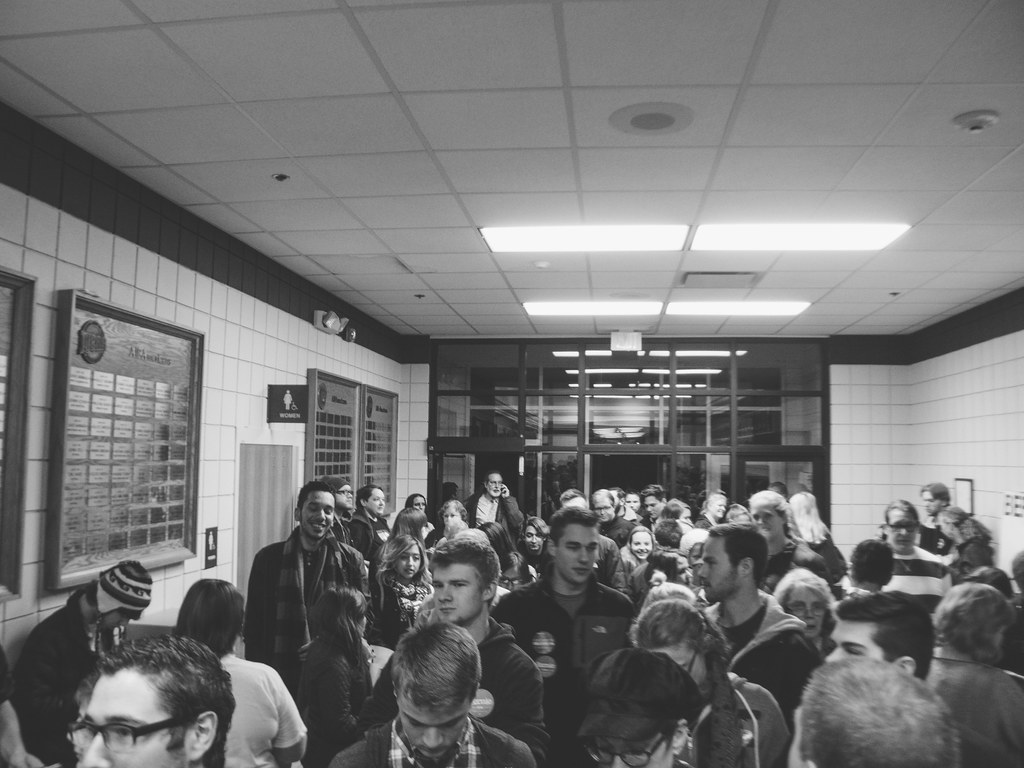 Eventually when they did open the doors, the line didn’t matter at all, and everyone just headed from where they were towards the doors. I overheard one person say, “If Bernie was in charge of the logistics, everyone would enter the gymnasium at the exact same time.”

The seating was set up in such a way that it wasn’t hard to get a good seat. The stage was set up directly in the center of the gymnasium, so with bleachers on either side and seating down below on the gym floor, everyone would have a great view of Bernie. I snagged a seat just to the left of center stage in the third row. 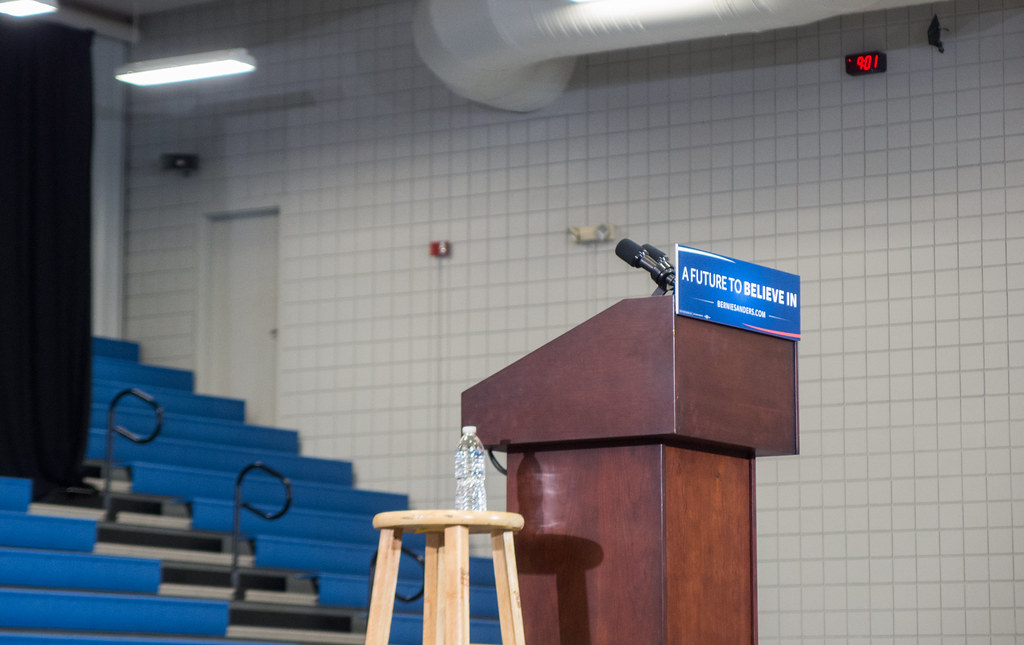 Soon the place filled up with fervent Bernie supporters. As a playlist of songs mentioning “revolution” played, various chants erupted from pockets of people sitting throughout the gymnasium. 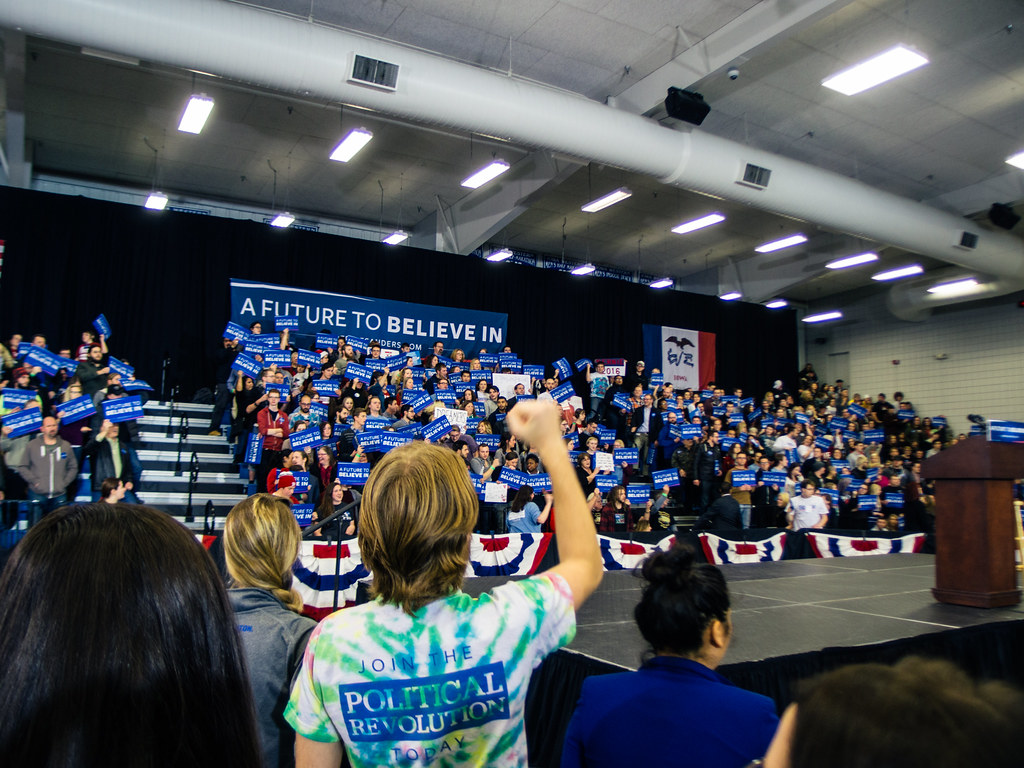 I asked the 20 year old guy next to me what he liked about Bernie and he said that he personally hates the establishment, and therefore likes Bernie for his willingness to take a stand.

Most people were excited and chanting, excited about their opportunity to see Bernie. But this guy seemed content to just sit and read his book: 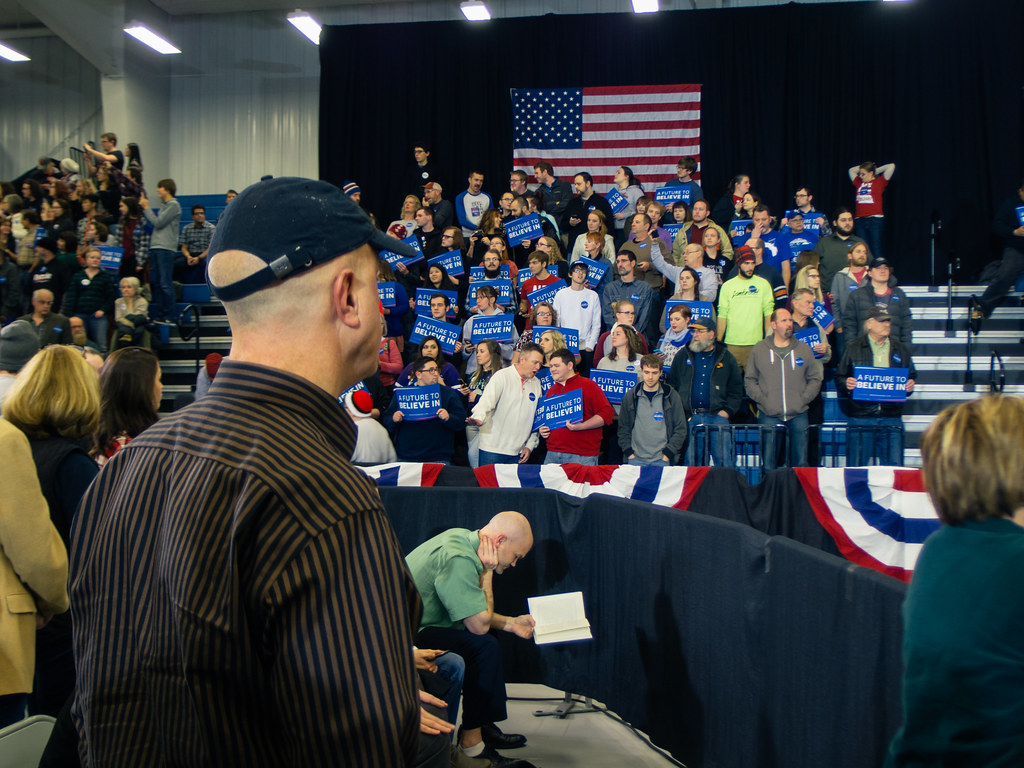 To start off the evening they had two local people, both union members, speak about how Bernie represents them and us. And what an honor it is to have someone like Bernie stand up with them and ultimately for everyone in America. The first man even had a few moments where he visibly got a bit choked up. The second man was a Vietnam veteran and UAW member. 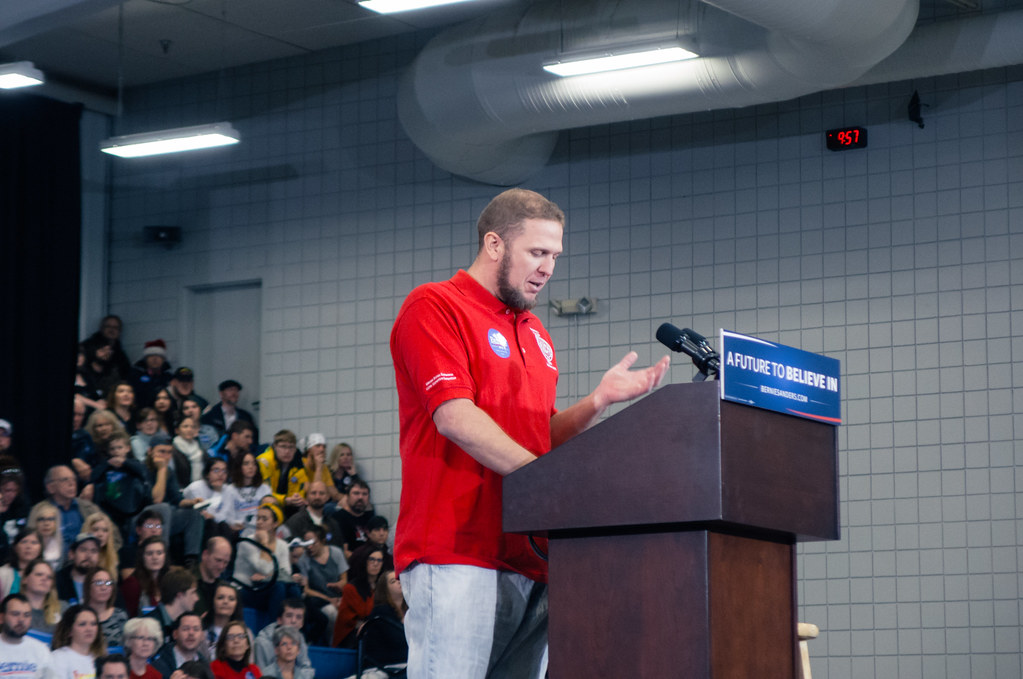 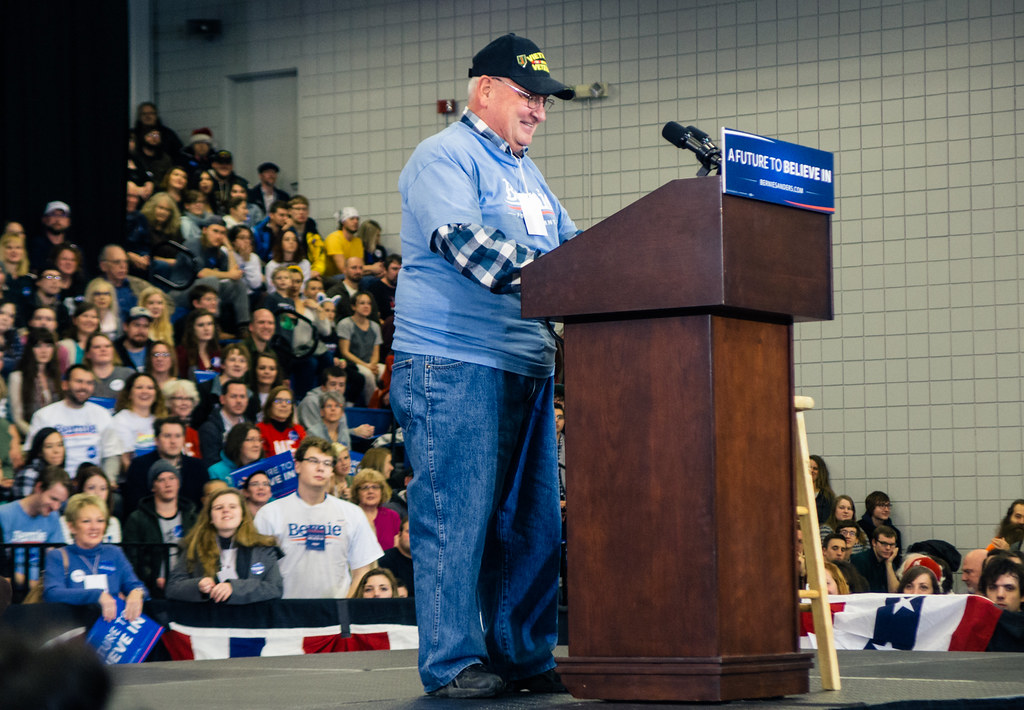 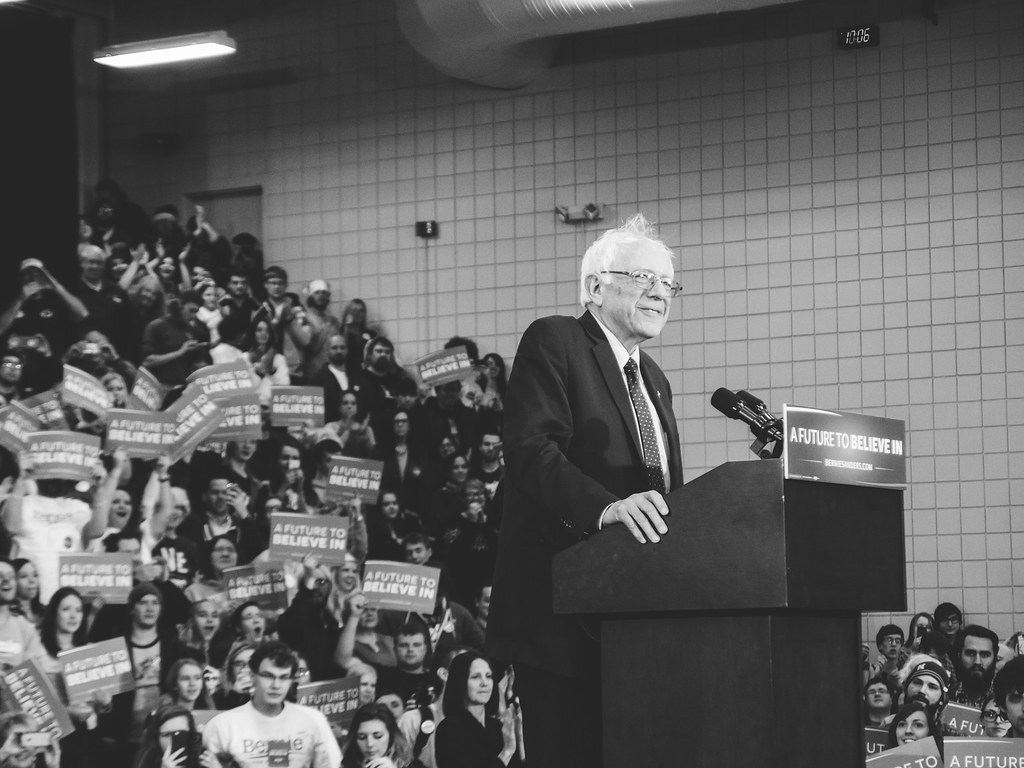 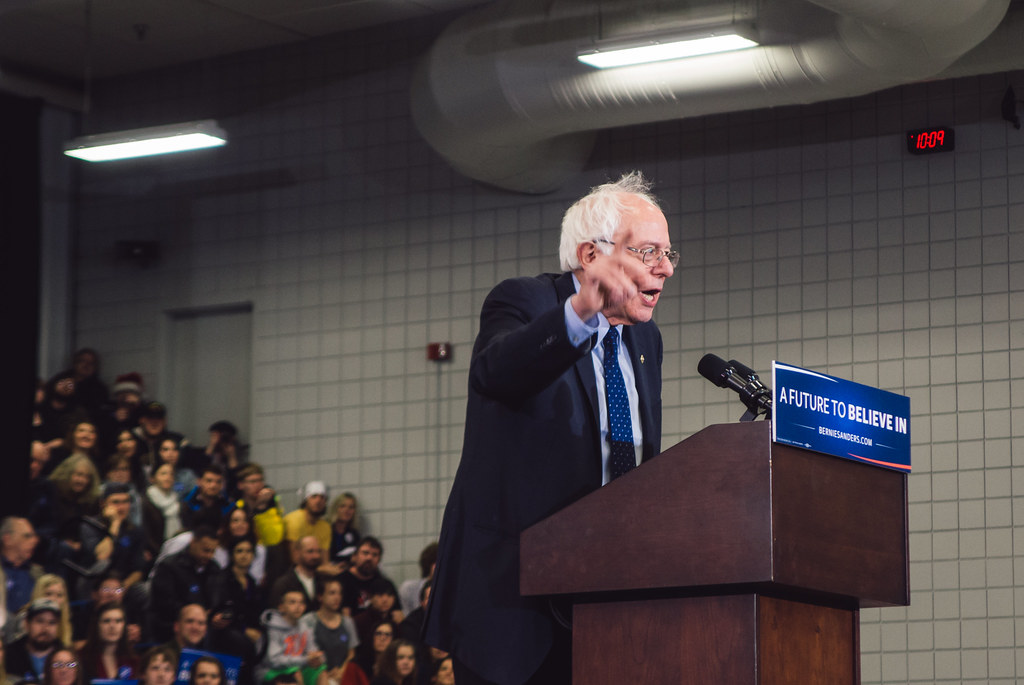 Bernie’s speech was not surprising. His script rarely changes in general (which is totally fine with me). But he was more humorous than I expected.

A memorable moment was toward the beginning when he talked about the difference in free airtime that he and Donald Trump have had in the media. Trump with 89 minutes and Bernie with 20 seconds.

As Bernie mentioned that he had only had 20 seconds in the media someone yelled out from the crowd, “That’s all the time we need!”

Bernie laughed in agreement and repeated it, “That’s all the time you need!” 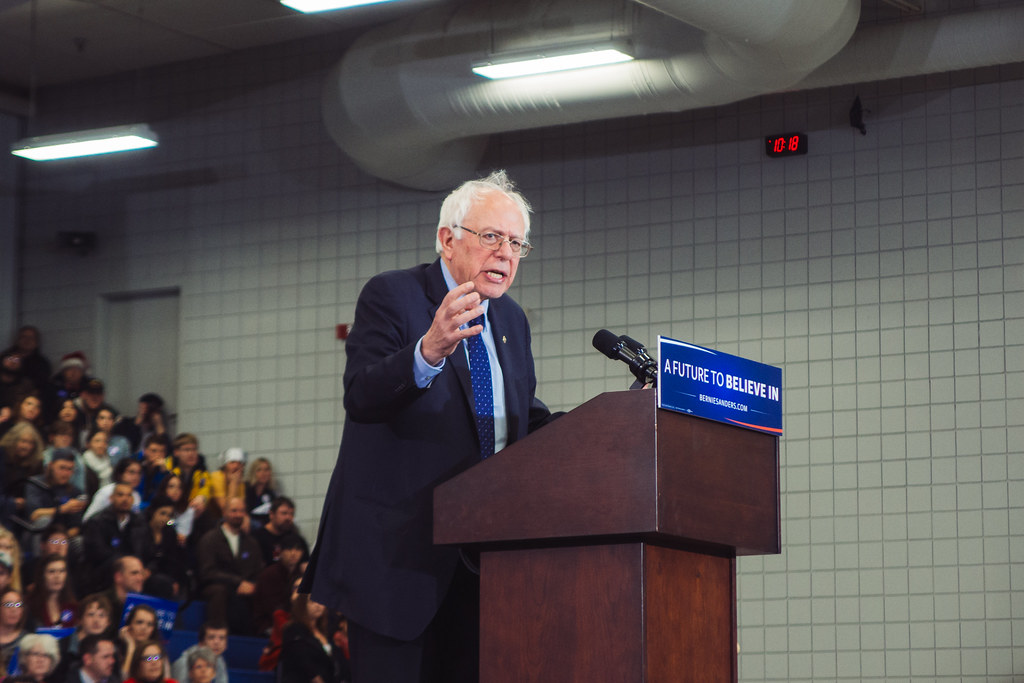 He also poked fun at Trump and his strange remarks and disgust with Hillary Clinton taking a bathroom break during the Democratic debate last Saturday.

I only took a handful of pictures, but during one of them Bernie looked right at me. 🙂 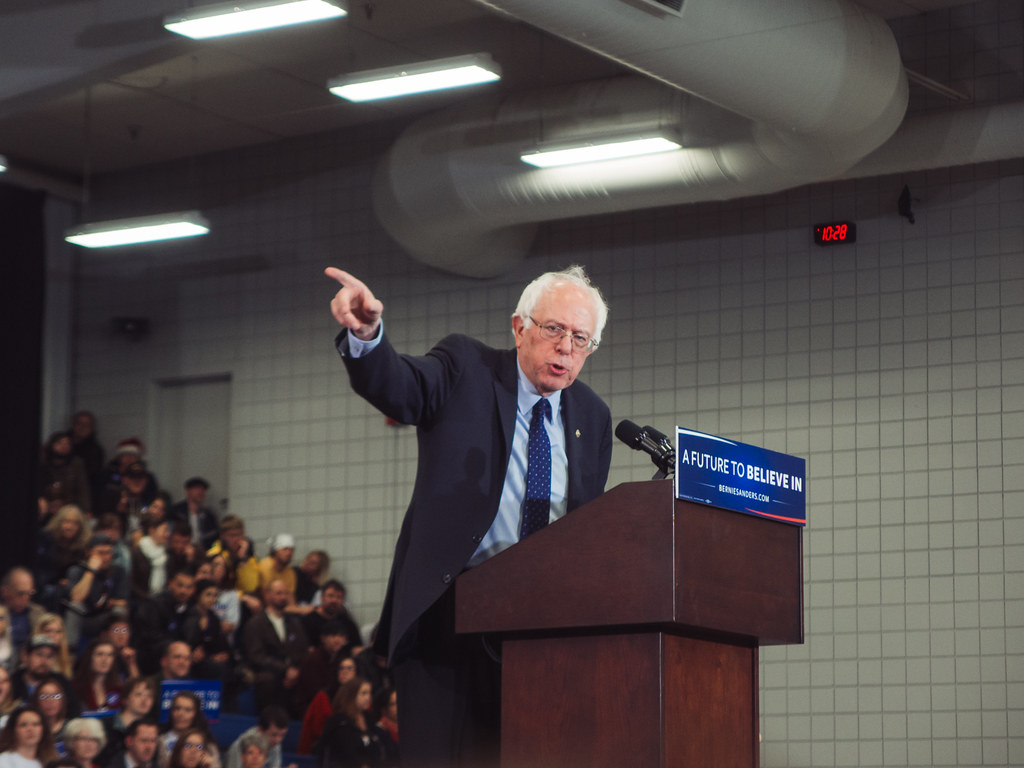 He focused on economic issues, as was expected, but also talked about single payer healthcare, climate change, college tuition, the shrinking middle class, raising wages, equal pay for men and women, ending institutional racism and mass incarceration, crushing ISIS, standing up against fear mongering towards Mexicans and Muslims, paid parental and medical leave, and of course the rigged campaign finance system. And at towards the end he connected the dots about these issues in various ways.

He didn’t take any time to really criticize Hillary beyond mentioning that she wanted to be liked by everyone, including those on Wall Street. Something that he says won’t happen with him because he is taking a stand against them. 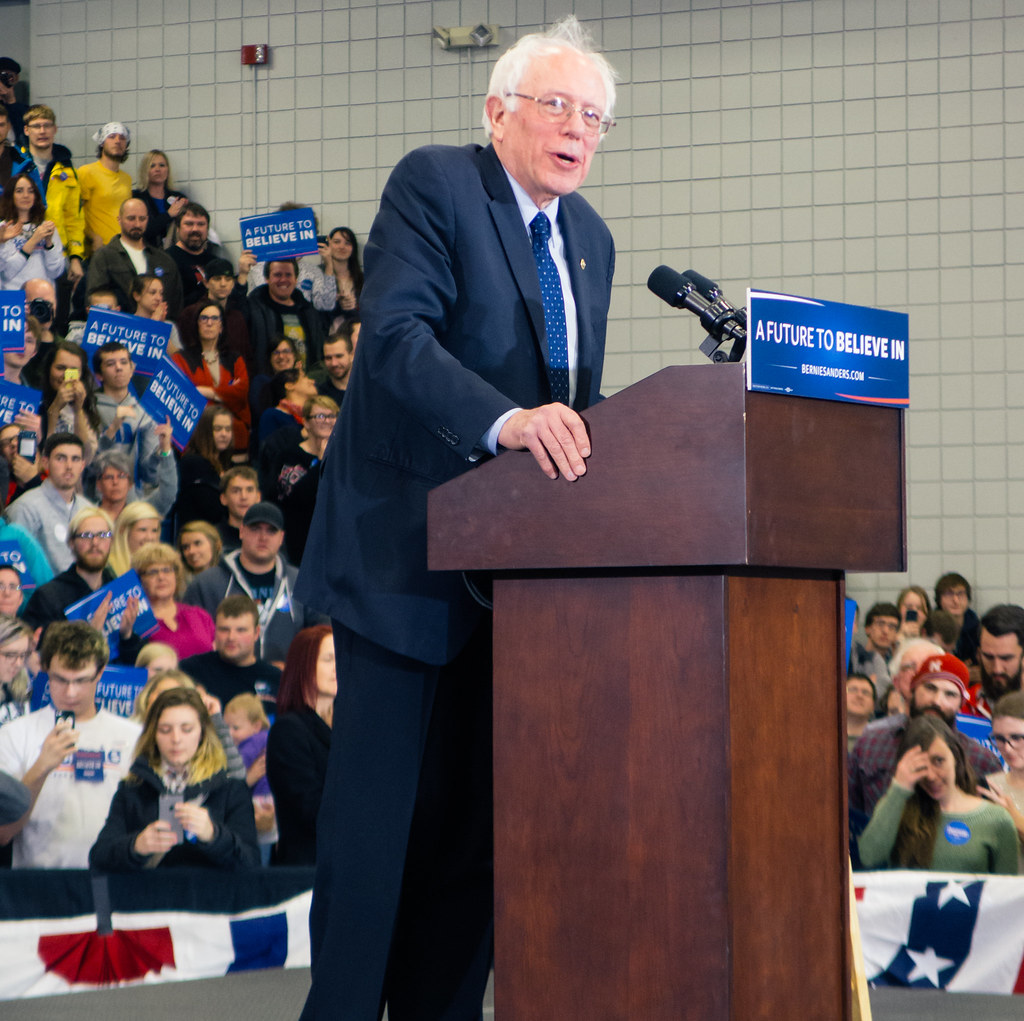 If you’d like to see video clips of the evening from my vantage point, go here.